An unheralded young Spanish player, who is not even a grandmaster, grabbed the solo leadership after Thursday’s fourth round of the 19th Dubai Open Chess Tournament–Sheikh Rashid Bin Hamdan Al Maktoum Cup at the Dubai Chess and Culture Club.

International Master (IM) Jaime Santos Latasa remained the tournament’s only player with an immaculate record of four wins in as many rounds after scoring the lone decisive result among the members of the third-round lead group – the rest of the erstwhile pacesetters all drew their matches.

The 20-year-old Spaniard conquered 12th-seed Sandro Mareco of Argentina in 48 moves of an English Opening – Four Knights variation. Playing the black pieces, the Argentine gave up control of the a-file as he committed himself to an attack against the white king, starting with the ambitious rook transfer to the fifth rank via the e5-square and eventually to a precarious outpost on g5. After shoring up the defence of his king, Latasa launched an attack of his own with heavy pieces occupying the open a-file. Mareco doubled down on the arms race, allocating more artillery to the kingside, but the rook on g5 eventually proved a huge liability as it could not reinforce the Argentine’s seriously weakened back rank, which Latasa quickly invaded with his queen and rook to deliver the coup de grace. 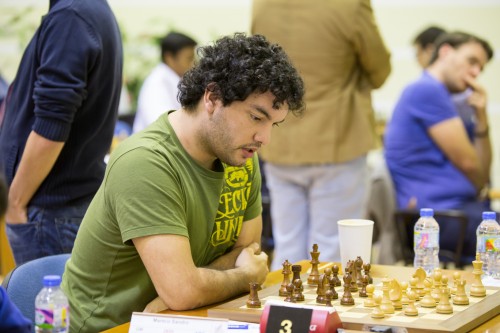 GM Sandro Mareco was upset by the current tournament leader

The matches between Russia’s GM Mikhail Antipov and Venezuela’s GM Eduardo Iturrizaga, Turkey’s GM Emre Can and India’s GM Vidit Santosh Gujrathi, Brazil’s GM Alexandr Fier and Turkey’s GM Mustafa Yilmaz, and Argentina’s GM Alan Pichot and Egypt’s GM Ahmed Adly all ended in a draw, which dropped them to a share of second place along with 12 others on 3.5 points.
Also in the chasing pack are second-seed GM Alexander Areshchenko of Ukraine, who overpowered China’s Xu Yinglun, the tournament’s highest-rated untitled player, and third-seed GM Eltaj Safarli of Azerbaijan, who defeated India’s GM Lalith Babu. 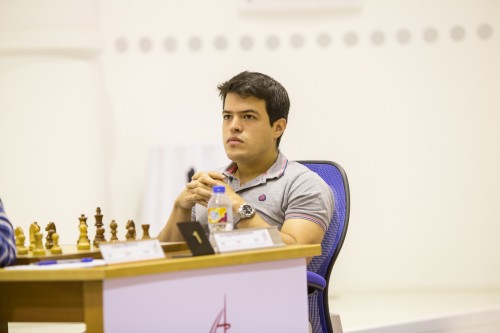 GM Bassem Amin won over China’s IM Xu Xiangyu to join compatriot Adly at the top of the leaderboard among Arab players with 3.5 points apiece, while the UAE’s GM Salem AR Saleh sustained his comeback with his third win in a row, beating Fide Master (FM) Farhan Mohannad of Jordan. Also with three points is IM Mohamed Tissir of Morocco following a win over India’s Vantika Agrawal. 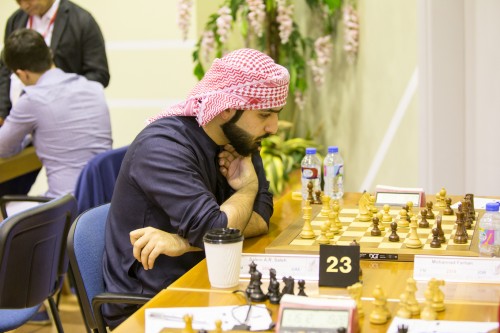 The UAE’s reigning champion FM Saeed Ishaq saw his unbeaten run halted by the Ukrainian top-seed Anton Korobov, who has won three in a row after losing his opening-round game. Ishaq has two points.

The tournament takes a brake Friday with the Dubai Open Blitz Tournament to be held starting at 5pm. Games will resume with a double-round on Saturday – the fifth round at 10am and the sixth round at 6pm.

Areshchenko will test the mettle of the youthful Latasa at the top board in round six, while Safarli will confront Georgia’s GM Mikheil Mchedlishvili on second board. The third board will feature a battle of former champions – Iturrizaga, who was the 2010 champion, and 2007 winner GM Levan Pantsulaia of Georgia.