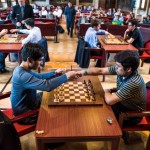 There was a big shake up in the standings after a full day of blitz. Wesley So still leads the tournament but his lead has narrowed to only one and a half points. The 2016 World Blitz Champion Sergey Karjakin dominated the day by scoring 6.5 points out of 9. He is now tied for second place in the overall standings with Levon Aronian. Maxime Vachier-Lagrave and Hikaru Nakamura are still also striking distance away from the leaders. With nine more rounds tomorrow, the tournament is still wide open, as a good or bad day for one of the leaders could completely change the outcome.

Wesley So had a strong start to the day when he extended his lead to three points before the start of round seven. Things started to turn sour when he found himself in a lost position against his countryman Fabiano Caruana but miraculously drew. This was indicative of So’s trouble to come as his solid play suddenly became shaky. He lost his next game to Shakriyar Mamedyarov then again to Hikaru Nakamura after an elementary blunder in time scramble.

Sergey Karjakin, on the other hand, moved up in the standings by winning his last three games defeating close rival Vachier-Lagrave, as well as Mamedyarov and the struggling Caruana. He was the only undefeated player of the day, which comes as no surprise as he is known for his blitz skills and finished second in the 2017 World Blitz Championship behind Magnus Carlsen. If he can repeat this performance tomorrow, he will be the favorite to win Your Next Move.
Maxime Vachier-Lagrave and Levon Aronian entered the day as So’s closest rivals with three points behind the leader. Up until round seven, Vachier-Lagrave was the only other undefeated player besides So. His only half point in the last three games came from his draw against Aronian himself. The Armenian, on the other hand, had a good finish to the day, by scoring 2.5 points in the last three games, thus leapfrogging the Frenchman.

Hikaru Nakamura had a subpar start to the day but, like Karjakin, finished strong with wins in the last three games. His most important victory was against So in the last round, which blew the tournament wide open for the field. He is now in clear fifth place and three points behind the leader, but still has a realistic chance of winning the event or at least finishing in the top three.

The shocking results of the day were from Caruana and Mamedyarov who scored 2.5 and 3 points respectively. Anish Giri still finds himself in the bottom of the standings after scoring 4 points today due to his poor performance in the rapid. Viswanathan Anand and Alexander Grischuk both scored 5 points today but are too far behind the leader to be in contention for the title.