The Asian Zonal 3.2 Championship 2013 took place on 2-9 February at the MAS Fabric Park Institution and Hotel at Thulhiriya, Sri Lanka. Two players from Bangladesh took first place – Ziaur Rahman on the open and Akter Liza Shamina on the women’s section.

A total of 46 players (34 men and 12 women) from Bangladesh, Pakistan, Nepal, Maldives and Sri Lanka participated in the event. The event was a 9-round Swiss with FIDE’s classical time control.

GM Ziaur Rahman had a tough task but fought hard to get the 7.5 points that gave him the victory. He was unbeaten and only conceded 3 draws, but just finished half a point ahead of the closest followers – GM Rifat Bin-Sattar and GM Murshed Niaz.

WIM Liza Shamima Aktar of Bangladesh had no opposition in the women’s section, and scored a total of 8 ½ points, just conceding one draw against Manisha Sachini Gunaratne of Sri Lanka. 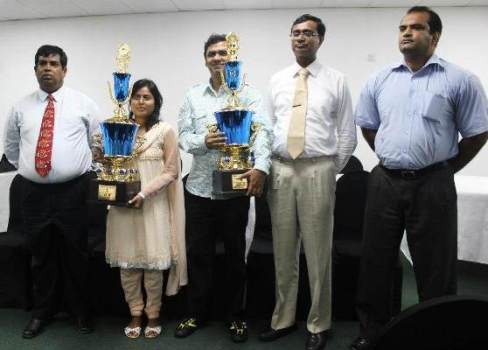 The winners receiving their trophies