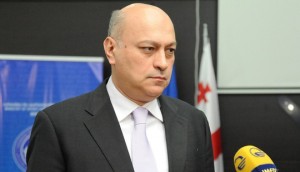 The first part of the interview was published on Saturday. The second part is concluding the conversation with Mr.Azmaiparashvili.

Q: Let’s move to a different topic. You have been elected ECU President in August 2014 in Tromso. What were your first activities and first results?

A: You know, I have to start with this, as my friends just informed me about the jokes posted on Danailov’s special website.

I am ready to hear the criticism, but it is difficult to accept it coming from Silvio Danailov. I’m just laughing at the numbers he is randomly throwing left and right.

Today I am proud to say that ECU has received in its bank account the first installments of the corporate sponsorship form the Bank of Georgia. A kind of sponsorship that ECU never had in its history. In the ECU General Assembly in Batumi we announced a realistic program for our for years (2015-2018).

We have a first plan of 200.000 euros of corporate sponsorship only. But I believe that the total addition in the ECU budget will be more than 400.000 euros.

I have already allocated 144.000 euros for the 4 years from my stipend. The last stipend (3000 euros) I decided to offer to Mr. Silvio Danailov for month August even if the elections were held on 11th. He accepted with pleasure.

From September the stipend for President is cancelled.

And we are working to bring other funding to ECU and till now in 2 months an additional, 10.000 euros development amount reached the ECU Bank account. This was not even calculated for the 2015 budget.

We have many connections and we have to use them. What should I do as ECU President, how can I attract sponsorship? You now, sponsors are not just giving money because they like chess, or they are crazy about chess, or whatever. They also expect to get something from this relationship and from our contacts.

Q: What about the administration expenses?

A: We have reduced them significantly comparing with Danailov and friends expenses. The closing of 2014 will be an important evidence. We have 7 months of previous administration and 5 months of ours.

In the next ECU General Assembly the delegates will see exact amounts recorded one by one. Unfortunately the numbers tell the truth and the truth is unpleasant for them.

Lets hope that Danailov and friends will come for the next GA. 40 delegates were waiting for them in Batumi to give explanations face to face, but they didn’t come. They disappeared.

It will be very interesting when our bookkeeper gives all financial data in front of them. And the bookkeeper is from Switzerland and the same person for the past 8 years.

The travel expenses cannot disappear into thin air, we have to present tickets, invoices, receipts. And now for the first two months of the year we spent only few euros for the President.

We are making transparent organization. Nobody can say that we hide something.

At the same time, ECU and national federations are still trying to solve the big problems left from previous administration.

My recent trips are connected with that. I went to Montenegro, we had meetings on the top, we work hard to bring back what belongs to the Montenegro Chess Federation. This federation suffered from the mismanagement of Danailov & friends.

Q: You mean fees from European Youth in Budva?

A: I believe that finally they will manage to approach the right accounts. Because you know there is one simple question. And we discussed this in the General Assembly. Still Silvio Danailov, Vladimir Sakotic, everyone, including Sava Stoisavljevic, are keeping silence.

The question was what was the purpose of the European Chess Union LLC, based in Delaware(!!) account in Slovenia?? Maybe Silvio refers to this organization when he says that ECU is not existing anymore?

Today we are also receiving lots of letters from Bulgaria. There was, let me remember, the so called European Cup in classical chess for men and women. This was not an official tournament in ECU calendar or regulations. Because there is information in press that the Bulgarian government gave money for these events believing they were official ECU events.

On next subject, Silvio said that now all tournaments will be in Georgia. Thanks God if we would be able to organize the tournaments! Because I have to repeat, considering the current situation in the world, it is very difficult to find the organizers.

We have to pray that an organizer will come forward and apply to hold ECU event.

This reminds me, we have to analyze why we always face a problem when we have to organize European Individual Championships.

Q: They are expensive?

A: They are expensive and they don’t bring many attractive points. The organizers from Jerusalem, Israel, were very much afraid. I went to Israel, helped in advertising the event, and now they are happy, they have more than 250 players and many top rated too.

Yes I advertised, this is my job. I have to go out, to help the organizers. And I believe, that with this active approach, I should be able to find the organizers.

By the way, based on my talks in Podgorica, I know that Montenegro will also come with some proposals.

I know that Russia has big financial problems, but we are working also with Russia, and we believe that we will have some events there.

We are of course open to all western European countries, they are welcome to apply for the events. Please, any tournament. I am ready to help with lobbying and promotion of any kind of tournament. Because I want to have western countries more involved in ECU. This would bring new geography, hopefully more sponsors for chess in general.

When you organize something with the government’s support – it is good, but in some aspects it is also bad. This is not a real sponsorship.

So now I will go to Israel, where we have ECU Board, and then to Reykjavik. I promised to visit the Reykjavik Open and I will fulfill my promises. We will talk also about the European Team Championships which will take place there in November.

I have to travel, this is my duty. When ECU President visits a national federation, they always arrange a meeting with higher authorities. And this is good, because in this way we can get more national support for chess and for federations.

I believe in April I will go to Guernsey, for the Small Nations event. Then we have FIDE Presidential Board in Chengdu.

Q: What is happening with the 2018 Chess Olympiad?

A: At the same time I have another obligation with the Olympiad. I am almost ready to quit my post at the Ministry of Sport. But I cannot quit until we get a clear picture, how the Organizing Committee will operate.

We passed a four-year state program for chess, but still we have to establish a clear structure. We will know more in one month. After that I believe I can focus only on chess.

Chessdom: Thank you very much for the interview