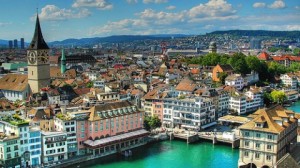 The 5th edition of the Zurich Chess Challenge is scheduled to take place from 12-15th February 2016 at the Hotel Savoy Baur en Ville in Zurich, Switzerland.

The oldest chess club in the world and its honorable member Oleg Skvortsov suggest an innovation for the future of classical chess with a new time control of 40 minutes per game with additional 10 seconds for each move.

In addition, a promotional two-game match will be played between Boris Gelfand (Vice World Champion 2012) and Alexander Morozevich (Runner-up of the SG Zurich Jubilee-Open 2009), with the same time control 40′ + 10″.

Let’s pay attention to the statistics how players perform against each other at classical chess. The rows show the results of each player with the white pieces while the columns present the corresponding headups with black.

Having in mind that the new time control is virtually a mix between the classical and the rapid tempo of play, it is interesting to see the rapid score between the players.

Finally, let’s focus on the overall scores between the players in all three time controls.

Overall ranking according to percentages: