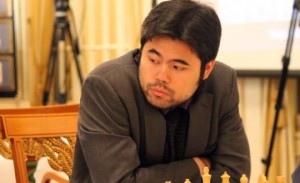 Hikaru Nakamura beat Sergey Karjakin in the third round of the 2015 Zurich Chess Challenge to move into sole lead with 5 points and break the magical 2800-elo barrier on the live rating list.

In the ultra-sharp English opening Karjakin mixed up the lines and gave the wrong check. This left him with material deficit and he could never recover as Nakamura swiftly converted the advantage.

Fabiano Caruana and Viswanathan Anand played a very interesting Gruenfeld Indian where black sacrifices an exchange for pawn and initiative.

Later Caruana missed a tactical shot that cost him a piece and landed him into weaker position. However, the material was reduced and white succeeded in trading the pawns down to a drawn endgame.

Vladimir Kramnik was forced to defend against his weapon of choice with white pieces – the Catalan opening. Levon Aronian was very energetic, breaking in the center and pushing black pieces into passivity.

Kramnik found the pragmatic solution, he gave up a pawn to free his forces and obtain counterplay. White could not make progress with two weak pawns and draw was agreed after almost six hours of play.

Vijay Kumar presents the video of the match of the legends and the third round of Zurich Chess Challenge: