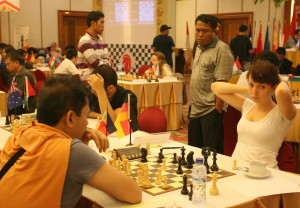 WGM Elisabeth Paehtz is the German representative playing at the Indonesia Open Chess Championship (IOCC) 2013. So far the 28 year old chess player has yet to hit her best form at IOCC. The 32nd place finisher at the European Championship 2013 held in Belgrade, Serbia, feels that IOCC is very strong and even if she is not performing as well as she could she is still looking to get a good result so here is what she has to say.

You won your fifth round game. So what is your assessment?

I won but I did not play well. Both my opponent and I made many mistakes. Now you have 3 points from 5 games. Are you satisfied with the result In the previous round I played very badly and made blunders. In fact I have not been playing well for the last six months and have lost many times.

Do you find playing two games a day to be a problem?

In Europe we don’t normally play two games a day. Also open tournaments are just rounds. I understand why the organizers have done this. They are hoping for improve the chances for their young players to get norm and so the tournament has more rounds than normal. I think that is the difficult part, otherwise two games on some days is not a problem for me.

So what is your target for IOCC?

I want to be among the top three women.

Is it hard to be a woman chess player in Germany?

I am lucky because my father is a GM (Thomas Paehtz) and he guided me until I achieved success. He taught me until I no longer needed a trainer. Now he trains others and I also now also do training as well. 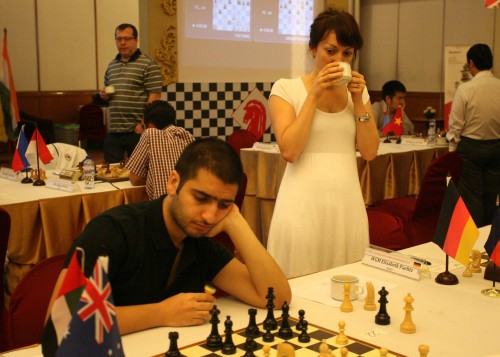 How was your recent trip to Africa?

I am involved in a project with a foundation in Germany that provides education to children. It is likely that in the future I will continue to be involved in projects like this which involves chess and children. I have also coached a Turkish team and have gotten experience as a teacher.

What do you think of the Indonesia women chess players?

The support given to Indonesia women chess is a lot more than I got when I was young. It is clear that Indonesia have concentrated resources to develop its woman chess players and this is shown by the achievement of the WGM title.

Is this your first time to Indonesia?

Yes. I am familiar with Asia. I have been to many Asia counties. Everywhere in Asia people have been very friendly to me so I was not surprised at the reception given by Indonesia peoples. Asians are warm and friendly unlike Europeans who are a little distant. I like it here, the hotel is good and the food delicious. Also I lobe Asian food.