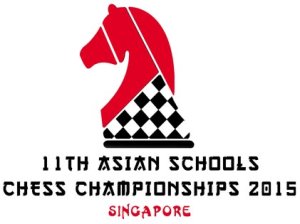 The 11th Asian Schools Chess Championship 2015 is returning to its birthplace in Singapore after ten years – from 30 May to 8 June 2015, the Singapore Chess Federation (SCF) will welcome an estimated 350 participants from 20 countries to the playing venue at Nanyang Technology University (NTU) in Singapore.

First proposed by Mr Ignatius Leong, then SCF Organising Secretary but now SCF President, the first championship took place in 2004 with 143 players from 12 countries, growing to 192 players the following year when again held in Singapore.

Since then many countries have also organised the event, notably UAE, India and Sri Lanka.

Last year the Asian Schools Chess Championship returned to the Far East, Chinese Taipei in 2014 increasing the number of participating countries to 14, and this year Singapore has significantly upped this to a record participation by no less than 20 countries!

Perhaps more significantly, first in Chinese Taipei and now also in Singapore, the percentage of local participation is now just around 20% which means that as much as 80% of participation is now from other countries, a complete reversal of what we have been experienced in recent years.

Asian Chess Federation President Sheikh Sultan Bin Khalifa Al-Nehyan will be guest of honour at the closing ceremony on 7 June 2015.