Chess is a mind game and has a huge tradition in our country. With the achievements of world champion Vishwanathan Anand, the game has become more popular in our country and many chess players of repute have emerged at different levels and made their mark on the world chess scene. One such player who has been hogging the limelight with his consistent performance on the international and national stage is Karnataka’s young chess player, Girish A. Koushik…

…Coached by his father H.V. Arun Kumar, who is a former Mysore University chess player, Girish Koushik presently has a rating of 2379. Girish also participated in the recently concluded SDAT Ramco 50th World Junior chess championships held at Chennai and kept everyone spellbound with his feats. He registered upset wins over Grand Masters, Durabeyli Vasif of Azerbaijan in the fifth round, S.P. Sethuraman of India in the sixth round, Sjugivov Sanon of Russia in the seventh round and Grandellius Nills of Sweden in the eighth round. He had also registered wins over Bukhalaf Khalil of Bahrain, and S. Prasanna and Ramnath Bhuvanesh of India in the initial rounds. 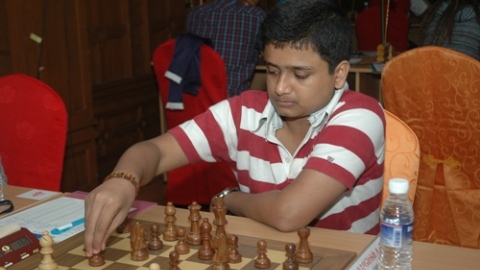 After eight rounds, Girish emerged as the joint leader with Hovhannisyan Robert of Armenia with seven points. Girish could not maintain his winning streak and lost four games in a row from the ninth round to slip down in the final rankings. He lost to GM H. Robert of Armenia, GM Swieriz Dariusz of Poland, Rusulov Vugar of Azerbaijan and Russia’s Gaganov Aleksey. He drew his final round tie against Norway’s GM Ureedal Frode and finished with 7.5 points from 13 rounds and 26th in the tournament, but he created a flutter in the tournament with his amazing and shocking upset wins over five Grand Masters — a great achievement for a young chess player.

It enabled him to improve on his ratings and he also secured his first International Master and Grand Master norms.

Girish said he was delighted and happy after his splendid upset wins over Grand Masters and International Masters in the World Junior chess championships.