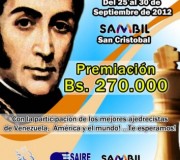 The 1st ITT Torunament “OAV Libertador Simón Bolívar” will take place from September 25-30 in the Hall of Conventions of Sambil in Ciudad de San Cristóbal, Venezuela.

It will be organized by the Organización Ajedrez Vinotinto and will give chances to get GM and IM norms, both for male and female participants.

A total of 10 rounds will be played. The pairings will be created using the Accelerated Swiss System until the 4th round. The time control will be of 90 minutes + 30 seconds per move from move 1.

This will be one of the most important tournaments played in South America in the last few years. Among the registered players, we can highlight the presence of GM Arkadij Naiditsch, the local GM Eduardo Iturrizaga, Brazil champion GM Rafael Leitao and the living legend GM Alexander Beliavsky.

Already 619 players from 32 countries are listed signed to take part in the event. There are 23 Grandmasters and 30 International Masters in the field. 1st ITT Torunament OAV Libertador Simón Bolívar – Players List.