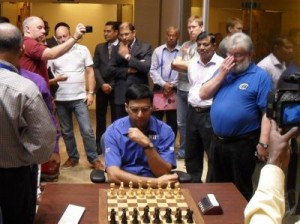 The World Chess Championship Match 2013 between the defending World Champion Viswanathan Anand and the Challenger Magnus Carlsen has been officially inaugurated at the opening ceremony in Chennai. It was a long first day for the players, the teams, the organizers, the journalists and the fans. All started early in the morning with inspection at the playing venue. Afterwards, the players proceeded to a press conference in a room crowded with journalists, and in the end was the opening ceremony at the packed Nehru Indoor Stadium.

Replay the videos of opening ceremony and press conference here