Irrespective of the draw against S. Arun Prasad of PSPB, former world junior champion Abhijeet Gupta continued to lead with 5.5 points at the end of the seventh round of the National Premier Chess Championship, organised by Marathwada Chess Association, at MIT, Aurangabad today. Five players are half a point behind him.

Both Ahijeet and Arun played the Semi Slav at a scorching pace, exchanging all pieces except the queen and rook. Both kings were vulnerable to attack and they agreed for a draw after 32 moves.

Surprisingly, former world U16 champion SP Sethuraman of Tamil Nadu, known for his fighting quality, claimed a 3 fold repetition draw against his team mate Deepan Chakravarthy after 23 moves, to be content with half a point. On the third board, a similar draw occurred between Abhijit Kunte and GN Gopal, both from PSPB in just 20 moves.

In the Ruy Lopez game played between former under 12 world champion Deep Sengupta of West Bengal and Saptarshi Roy of Railways, the latter lost a knight on 17th move and never recovered back and lost the game in 40 moves. 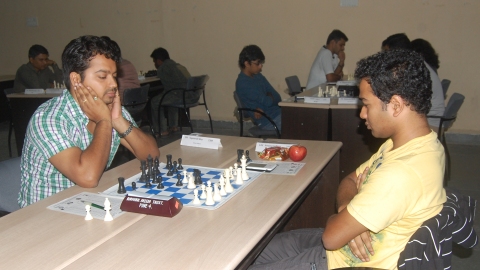 Playing the Sicilian defence, defending champion Parimarjan Negi of PSPB was in his elements finally, to outwit Rahul Sangma of Delhi in 35 moves. Negi recorded his first win in the last six rounds.

MR Venkatesh of PSPB subdued Orissa’s first WGM Padmini Rout, when she was forced to give up her rook by a tactical attack.

National challengers runner up P. Shyam Nikhil of Tamil Nadu weaved a mating attack on the king of BT Muralikrishnan from Railways, combining queen, rook and light coloured bishop to get away with a point.

Former world under 10 champion Girish A Koushik was forced to give up his bishop to avoid a checkmate by Asian Junior champion M. Shyam Sundar of Tamil Nadu. Shyam dealt a heavy blow to the norm aspirations of Girish in mere 28 moves.

All the three Woman Grandmasters Swati Ghate and Soumya Swaminathan of Maharashtra and Padmini Rout lost their games today.