The Olivier Breisacher Memorial heated up today with two decisive results. This creates a lot of tension in the standings with three rounds to go. Etienne Bacrot drew his game today and kept the lead, but there are now three players just a point behind him. The Bilbao score system creates even more suspense given that it allows sudden changes in the scores.

The two players that joined Ding Liren in shared second place are Alexander Moiseenko and Maxime Vachier-Lagrave. Both of them used the white pieces to defeat their opponents in very hard-fought struggles. Vachier-Lagrave will play Bacrot tomorrow with black, while Moiseenko will also have black against Ian Nepomniachtchi.

Alexander Moiseenko recovered quickly from his loss against Ding Liren in the sixth round. His win over Richard Rapport was not an easy affair, however. A clear crush of styles was seen over the board, with the more classical and conservative Ukrainian eventually got the upper hand over the creative and adventurous Hungarian. Let us not forget that the same result was seen in the first half of the event, when Moiseenko won with black in 38 moves.

It is not surprising that Rapport uses a sideline in this event. Today, he played a quick b5 in a sort of Queen’s Indian Defense. Moiseenko took over the center and got a slight space advantage on the kingside. On move 28, Rapport was forced to sacrifice his bishop for a couple of pawns and started to defend his inferior position. The Ukrainian showed great technique in the queen’s endgame a knight up to get the full point in 75 moves. 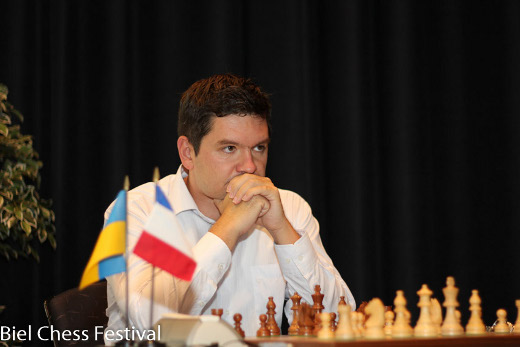 Another repeated result from the second round was seen in the next board. Maxime Vachier-Lagrave defeated Ian Nepomniachtchi with white in 65 moves. It is interesting to note that both winners of today’s games lost against Ding Liren with the black pieces.

The game was a kind of King’s Indian with white’s knight on d2 instead of c3. Nepomniachtchi concentrated his forces on the queenside, doubling his rooks on the c-file. Naturally, the French GM expanded on the kingside, quickly opening the h-file to create problems for the opposite king. Nepomniachtchi took his monarch to b8 but this did not stop white from advancing his pawns looking for tactical shots. The result was a rook endgame where white is a pawn up. Vachier-Lagrave smoothly converted this advantage into a victory. 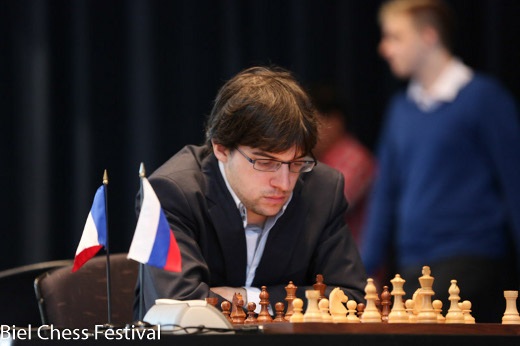 Most of the attention was put on the game that faced the leader and second-placed Ding Liren. The game was very interesting and saw the Chinese missing some chances to claim the lead. Etienne Bacrot defended stubbornly with black to split the point and keep his place at the top.

The Nimzo Indian put up by Bacrot was answered with a quick f3 by white. Black expanded on the queenside and allowed his opponent to advance his strong central pawns. When the smoke cleared, Ding Liren was left with a passed pawn on d6 in a four-rooks endgame. The Chinese lost the d-pawn in exchange of passing his soldier on the h-file, however, this was not enough to win at the end. Draw in 57 moves. 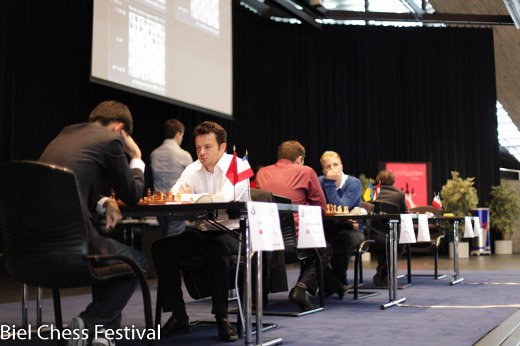