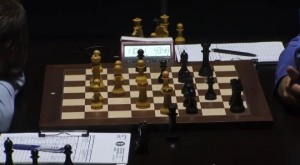 Magnus Carlsen and Viswanathan Anand came two moves short of breaking the record for longest World Championship game. They played a Rook + Knight vs Rook ending, which arose from the Berlin opening, in their round 7 game of the World Chess Championship 2014 in Sochi. The game ended on move 122 in a draw.

The longest game in a World Championship match so far remains the game between the legendary players Korchnoi and Karpov in Baguio 1978. It was draw in 124 moves.

The game Carlsen – Anand from round 7 broke a viewership record: it visited by 450 000+ people on the Chess Arena online platform during the day, and with 170 000 simultaneous viewers around move 60 the servers could not take it anymore. Starting tomorrow the server structure will be doubled to hold the final rounds. Thank you for following with us!