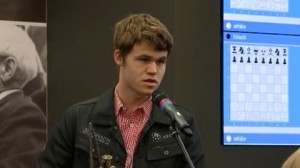 Carlsen at the opening ceremony with the Chess Oscar in hand