Under the title ‘Chess for Leadership and Creativity’, a programme has been initiated in Palestine dedicated to young Arab women. This is an extension to the partnership agenda between “Peace and Sport” and FIDE.

It is under the patronage of Alexandra Kosteniuk. FIDE thanks the President of the Mediterranean Chess Association, Damir Levacic and his daughter Melissa for their support in the project.

On November 10, “CHESS FOR LEADERSHIP AND CREATIVITY”, a structured program using chess to encourage Palestinian women’s empowerment and develop their leadership skills, was launched in 5 Youth Centres in East Jerusalem, Bethlehem, Qatanna and Hebron.

“CHESS FOR LEADERSHIP AND CREATIVITY” is 3-year pilot program dedicated to young Arab women living in challenging and sometimes dangerous environments with the objective of empowering them to create a better future and to develop activities for their neighbourhoods.

The intrinsic values of chess (such as perseverance, discipline, creativity, accepting defeat, continual quest for progress and focus) will facilitate these vulnerable young women’s personal development, improve their emotional stability and encourage their social integration. 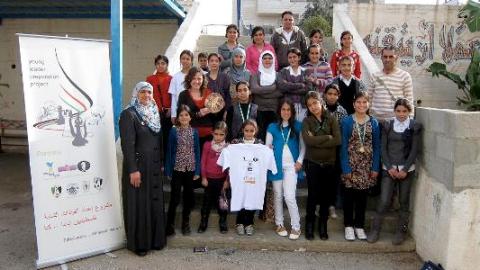 “Chess for Leadership and Creativity” is a project under the guidance and leadership of the Palestinian Chess Federation with support from the Monaco-based international organization Peace and Sport and the World Chess Federation (FIDE). It is designed as a pilot project, which will be duplicated and transformed into a national program at a later stage.

“Chess for Leadership and Creativity” is placed under the patronage of international chess Grandmaster and former World Champion Alexandra Kosteniuk. The ‘Chess Queen’ is also a Peace and Sport Champion for Peace and a true ambassador for chess worldwide, who has always worked to ensure that her favourite sport serves peace, human development and social progress.

Peace and Sport and FIDE signed a partnership in 2010 to pioneer activities that use chess as a vehicle for youth development, social cohesion and pacific coexistence. The “Chess for Leadership and Creativity” program is the third achievement of this partnership, after similar programs in Colombia and Haiti.

To support the program, please go to our webpage