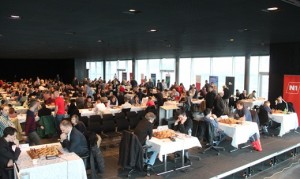 The Reykjavik Open has added one more round to its usual nine this year, and two will be played today. The players had to wake up early for a 9:30 session and will have to recover fast after their games because they have to comeback to the arena at 16:30.

The pairings for the second round are still unbalanced, but it will be harder for the favorites to overcome their very motivated rivals. Even though there are big ratings differences, the top seeds will have to face titled players that might already have some experience in these situations.

The first upset of the day came very early. Scottish IM Andrew Muir (2313) defeated Egyptian GM Bassem Amin (2631) after just 19 moves. Amin blundered on move 17, when he sacrificed a knight with the idea of gaining the opponent’s queen a couple of moves later. However, he did not notice the knight fork Nf3 at the end of the line.

The rest of the games are just leaving the opening stage with everything still for grabs in relatively balanced positions.