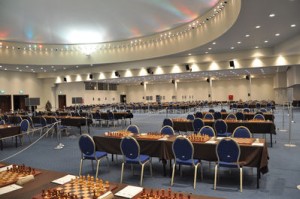 38 teams in the Open and 28 teams in the Women Section are participating. After the arrival of delegations, a Captains’ Meeting took place Wednesday at 22:00h local time.

The Captains submitted the final team compositions (board order) and the round one pairings were confirmed.

One of the most important instructions is that the players cannot leave the playing area and facilities, and that they can discuss draw offers with their captains only in the presence of the match arbiter.

There will be additional arbiters overseeing the playing hall, analysis room and bar to prevent any suspicion of irregular players’ behavior.

A doping control might take place during the event, at the discretion of the FIDE Medical Commission.

Tomorrow is the opening ceremony at 14:30 local time (13:30 CET), half an hour later at 15:00 start the live games. You can follow live the open section here and the women section here.