At the start of the last round all group 1 players stood level. Only Peng, unhappy about her first game against Van der Sterren, managed a convincing win, obtaining outright the first place.

In group 2 Van Kampen trumped Conquest in time trouble and he also was the sole winner of his group.

Van der Sterren almost equalised against Zhaoqin Peng with … Bb4 and … a5 in a Queen’s Indian opening. But 16. … e4 turned out to be an ill-fated move. Van der Sterren had missed White’s reply 17. Nf4, and then played the decidedly wrong 17. …f6. After this Black’s position was beyond repair. Peng was happy with her revenge after having been reproached in round 2 for taking a draw too quickly. 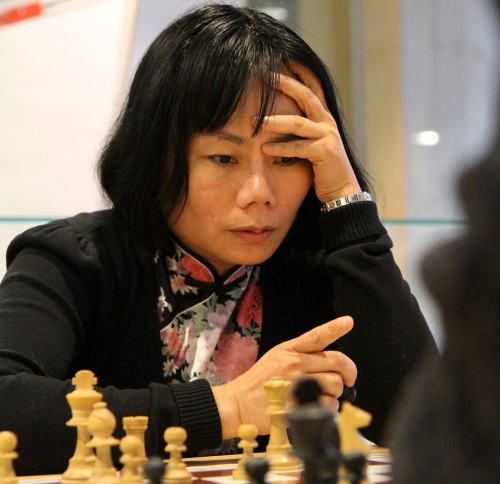 In the second game in group 1, a King’s Indian, between Pia Cramling and Fridrik Olafsson, it looked as if Cramling had the initiative on both wings. Olafsson defended himself resourcefully and even reached an endgame with a pawn up. But Cramling had active play and didn’t allow any winning attempt the game ending in a draw.

In group 2 Conquest played 4. … Nge7 in the Spanish, currently a popular variation. Robin van Kampen was able to rely on his preparation with Grandmaster Sokolov. As he was sure Conquest would surprise him anyway he hadn’t prepared anything in particular, preferring a good night’s sleep instead.

In the middle game Van Kampen got the edge and Conquest consumed a lot of time on the clock to work up some counterplay. Van Kampen thought for a long time he had everything under control but got worried when he couldn’t play 23. g4 because of 23. … Be2. 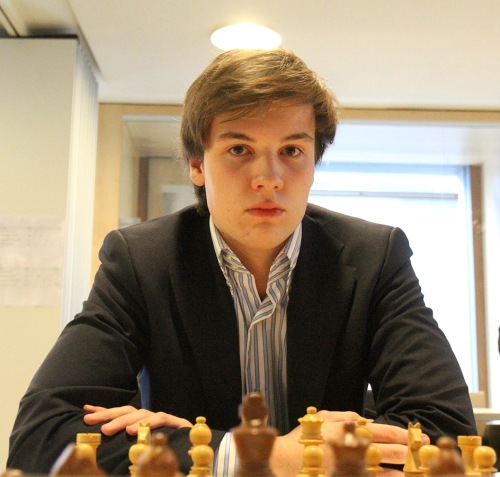 When Conquest played 30. … Qa1. 31. Qb1, Qa4 instead of the better 30. … Nb5 Van Kampen dealt the decisive blow with 32. Nc6 winning at least the exchange. Conquest resigned after reaching the time control, disappointed that his original play had yielded so few points.

In the other game Ketevan Arakhamia-Grant gave it a go with black. She offered Monika Socko an exciting game with 1.d4, Nf6, 2.c4, c5. When Socko avoided this with 3.e3, Black easily obtained an equal position. After 20 moves the major pieces were exchanged and a drawn end game was all that was left. After about ten further moves it was indeed agreed drawn.

The prizegiving for the Euwe Memorial tournament took place in De Kring, a location already special on account of the many chess players and artists who made the club both famous and infamous. 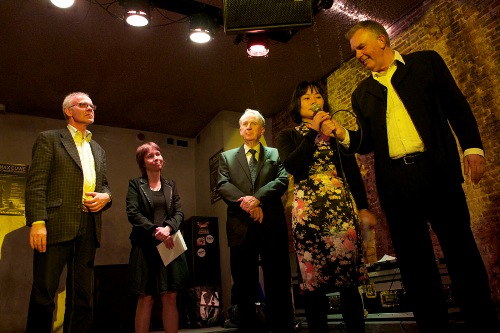 On Sunday evening the setting was even more special as visitors were immediately confronted upon entry with a chess performance by Jennifer Shahade of her creation of Naked Chess, this time as a simul against three chess playing, nude artists’ models.

The lighting created dramatic shadows against the back wall while Shahade walked from board to board in her beautifully stylized dress.

Against this back-drop Hans Böhm smoothly introduced the audience to the various acts. ICGA president David Levy reminisced about his conversations with Max Euwe on the future of computer chess. Hans Ree and Alexander Münninghof sang the Euwe March striking exactly the right degree of solemnity. Tex de Wit proved that humor and chess certainly mix well, opening his stand-up act with thanks to tournament director Monique van de Griendt for meeting his exacting pre-conditions, which had apparently included having three nudes next to him on stage playing chess! 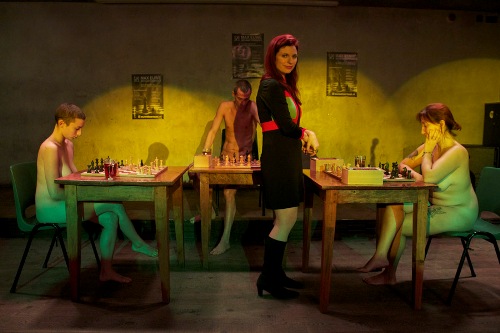 At the end the tournament participants accepted their prizes to loud applause. Thanks to them it was a fantastic tournament. The organisation therefore hopes that the Max Euwe Tournament will take place again in the near future.