After nine rounds of play in the FIDE Grand Prix in Tbilisi Russian Grandmaster Evgeny Tomashevsky is enjoying a big 1,5 points lead ahead of the nearest follower.

However, he warns that nothing is over yet:

“I don’t think the tournament is over, there are still two more games to go and everyone wants to beat me.” 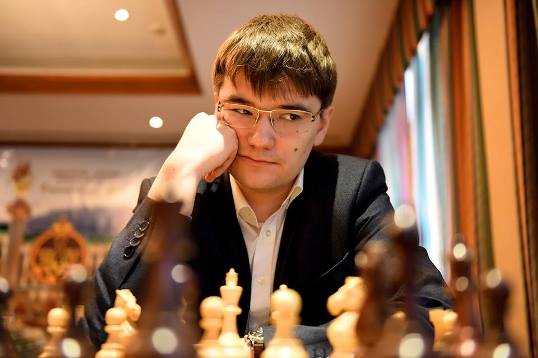 Elaborating on his win against Rustam Kasimdzhanov:

This was my 4th King’s Indian in the tournament. I didn’t expect it at all, I wanted to play safe today, but Rustam was out for a win.

He got a good game going. But these positions require lots of experience, and if you don’t have them regularly, sometimes it is very hard to come up with the best moves. You need to have a good feeling on these positions.

Rustam of course played a lot of KID games earlier, but now he took it again after a long break. At one point he hesitated, trying to be too safe, and that was the moment when white got the advantage. 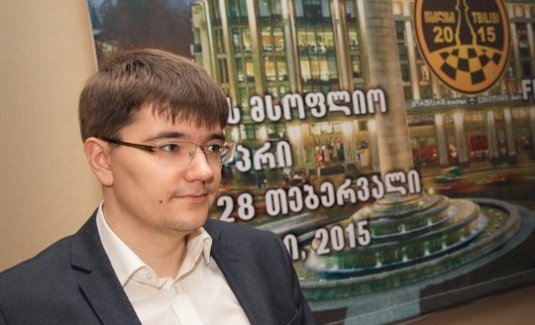 On the question how come he was not afraid to play the same system (Makagonov) against the KID, despite the possible preparation, Tomashevsky said:

We analysed this system for many hours, days with my second GM Alexei Iljushin.

You cannot just consider your openings according to the computer evaluation. This position is strategical and I think when you spend a lot of time you get a good feeling of the nuances, and you just have to be principled and play it without fear.

On our remark: You said everyone wants to beat you in this tournament, but you are still undefeated in the Grand Prix series.

Yeah, well, I think it is also matter of some luck. I probably should have lost against Leinier Dominguez in Baku, I had a completely lost position there. I also had a couple of doubtful games. So overall I think I was just lucky not to lose any.

The 10th round starts at 12 CET, follow live games here