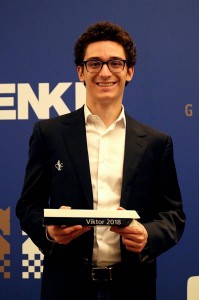 Fabiano Caruana is the winner of the GRENKE Chess Classic 2018, barely two weeks after his success at the Berlin Candidates Tournament – a very impressive feat. The players treated fans to an exciting finish at the LA8 in Baden-Baden as both crucial games, Vitiugov-Caruana and Anand-Carlsen, were fiercely contested encounters.

The first game of the day to end was the encounter between Aronian and Bluebaum, which ended in a draw. Matthias met Levon’s 1.d4 opening with the so-called Vienna – a line our commentator Jan Gustafsson is very well-versed in, having published an entire video series on this topic. What ensued was a heavy theoretical debate, where the Armenian seemed to be better prepared as his opponent spent 45 minutes on moves 15-17. However, Aronian never managed to prove any advantage and a draw was agreed on move 41. This result crowned an excellent tournament performance for Matthias Bluebaum, who finished on an impressive 50% after losing his first round game to Vitiugov. For Aronian meanwhile it was a lacklustre showing, which nevertheless saw him finish on an undefeated 5/9.

The centre stage was now cleared for the two tournament-deciding battles and the first of those to finish was the remake of the 2013 and 2014 World Championship Matches between Anand and Carlsen. Magnus made his winning intentions clear from the get-go as he met 1.e4 with the Richter-Rauzer variation of the Sicilian, which incidentally was also Caruana’s choice in the last round must-win game against Karjakin at the Moscow Candidates 2016. Despite this probably catching Vishy off-guard, Leko felt it must have been a good surprise as the Indian legend has a fantastic feel for the kind of position which appeared on the board. What ensued was ‘a really instructive, very high-class game’ (Leko’s words, once again) which eventually fizzled out into a draw on move 41. The players were in high spirits as they joined the live show to explain the finer points of their encounter and despite both being dissatisfied with their overall performance they deemed today’s effort a good and interesting game.

Once the Anand-Carlsen game had ended in a draw, the situation became even more reminiscent of the last round scenario at the recently concluded Candidates Tournament. Caruana was once again facing a Russian opponent with the black pieces (in the exact same opening nonetheless, but more about that later) and a draw was now enough for him to secure sole tournament victory. However, by the time the World Champion and his predecessor agreed a draw Fabiano’s position was already so good that, just like in Berlin, the thought of offering a draw never crossed his mind.

The game had started in very interesting fashion as up until move 5 the players were following the last round Candidates clash between Grischuk and Caruana, but here Fabiano ‘improved’ on his 5…Nxd2 with the novelty 5…Qd7! As Fabiano smilingly explained in his interview, he had only looked at this move on the train between Berlin and Karlsruhe. It served him well though, as in his own words he got a solid positional foundation and things went smoothly after the opening phase. The American thought Vitiugov should have played c3 at some point to not allow d4 so easily and that after 27…Bc6 Black’s position was already almost impossible to hold on to. Vitiugov eventually resigned as the first time control was reached on move 40 and Caruana was the new GRENKE Chess Classic champion. Summing his tournament up, Fabiano stated that ‘it was a great tournament and at the end especially it couldn’t have gone any better’.

Despite the tournament winner and podium having been decided at this stage, Vachier-Lagrave against Meier and Hou against Naiditsch were interesting battles in their own right. In a nutshell, it was a narrow escape for both rating favourites as both Hou Yifan and Georg Meier came very close to scoring their first full point of the event but were ultimately held to draws by their respective opponents.

Thanks to his last round victory Fabiano Caruana not only became the sole winner of the GRENKE Chess Classic 2018, but he did so by leaving the rest of the field a full point behind him as he scored a magnificent 6.5/9. Magnus came sole second on 5.5, while Vitiugov, Vachier-Lagrave and Aronian shared places 3-5 with 5 points. Matthias Bluebaum took 6th place as the only player on 50%, places 7-9 were shared by Anand, Naiditsch and Hou on 3.5 and Meier came in 10th on 3/9.

During the prize giving tournament director Sven Noppes highlighted the success of the event, both in Karlsruhe and in Baden-Baden. The victory of Vincent Keymer in the GRENKE Chess Open and of Fabiano Caruana in the GRENKE Chess Classic fulfilled all expectations, both in terms of audience response and of their actual performances over the board.