In 2019, FIDE officially recognized the World Fischer Random Chess Championship. In the final of the inaugural edition, held in Norway, American Grandmaster Wesley So defeated classical chess champion Magnus Carlsen. The two-year pandemic hiatus put the organization of many major chess events on halt, and we’re excited to announce the second edition of the Championship is taking place this year.

“I am so excited to be competing in Fischer Random again! And in Iceland! It couldn’t be more special than to compete in that particular place, defending my title against the best players in the world. To play in Reykjavik, fifty years after the match between Fischer and Spassky, gives it a historical perspective that cannot be matched,” commented Wesley So. 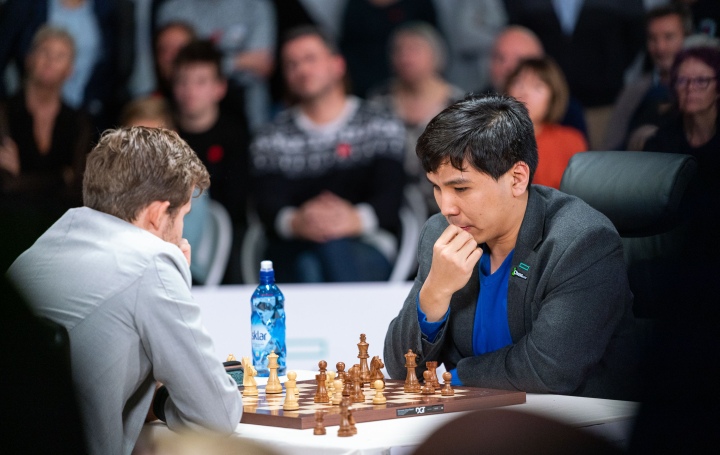 The overall prize fund of the final in the Icelandic capital amounts to a whopping 400,000 USD. Eight players will have a shot at the 150,000 USD first prize and the FIDE Fischer Random World Champion title. Three of the four invitees are already confirmed. They are the defending champion American grandmaster Wesley So, the world’s top-ranked grandmaster Norwegian Magnus Carlsen, and the strongest Icelandic grandmaster Hjorvar Steinn Gretarsson. The fourth player will receive the wild card from the FIDE President.

The four directly seeded players will be joined by the four winners of the online qualifiers on Chess.com and Lichess.org, two from each site.

The finals will consist of a two-group stage followed by the knockout semifinals and final. The time control will be 25 minutes per player for the first 30 moves, after which each player will receive additional 5 minutes on the clock and an increment of 5 seconds per move.

The Championship in Reykjavik will be broadcast live by NRK, the largest media organization in Norway and FIDE’s long-term partner, and RUV, Iceland’s major national broadcast company. As in 2019, the final will be organized by Dund AS, a Norwegian shareholding company. Lichess qualifiers are organized with the support of Offerspill Sjakklubb, Charlotte Chess Center, and the North American Corporate Chess League.

“The second edition of the FIDE World Fischer Random Chess Championship in Reykjavik is timed to the 50th anniversary of Fischer and Spassky’s ‘Match of the Century’. It remains one of the most famous chess competitions in history. We’re thankful to the Icelandic Chess Federation, Dund AS and all our partners for making this tribute happen. Fischer Random Chess is an extremely popular chess variant, equally enjoyed by the top professionals and chess fans. We underlined its importance by officially recognizing it in 2019 and are determined to continue on the path of supporting it,” emphasized FIDE President Arkady Dvorkovich.

“We’re excited to continue fruitful cooperation with FIDE and hold the second edition of the FIDE World Fischer Random Chess Championship. We’re sure it will be packed with thrilling chess action and keep fans on the edge of their seats from the first to the last move of each game, which is the nature of Fischer Random chess,” said organizer, FIDE Vice President Joran Aulin-Jansson.

What is Fischer Random Chess?

Fischer Random is a chess variant invented by legendary Bobby Fischer, 1972-75 World Chess Champion. The game’s rules are the same as standard chess, but the starting position of pieces is randomly shuffled. It reduces the impact of opening theory and makes players contemplate game development from the first moves.