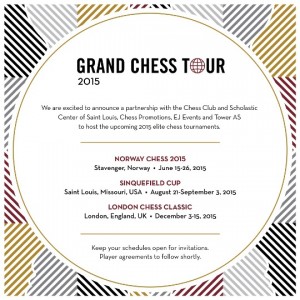 The world’s most prestigious, international chess events are combining efforts to establish a gold standard for the inaugural Grand Chess Tour, an annual competitive circuit for ten of the world’s top grandmasters. The announcement was made today at a press conference held at the Chess Club and Scholastic Center of Saint Louis.

The Grand Chess Tour is an affiliation between the Chess Club and Scholastic Center of Saint Louis (Sinquefield Cup), Tower AS (Norway Chess) and Chess Promotions Ltd. (London Chess Classic), combining the organizational efforts of three elite events into one unified competitive structure. The partnership aims to raise worldwide awareness for each prestigious tournament, as well as for the tour.

The inaugural 2015 Tour will kick off in June as a three-event cycle, beginning with Norway Chess 2015, followed by the Sinquefield Cup in August/September, and finishing with the London Chess Classic in 2015.

Based on FIDE’s January 2015 rating list, the Grand Chess Tour invited the world’s top-ten international grandmasters, eight of whom agreed to appear in all three international events. A ninth grandmaster, who will also play the entire tour, will be added at a later date. The tenth and final grandmaster will be selected as a wildcard by each organizing host.

The participating players are:

“The Grand Chess Tour was created with just one goal in mind: Demonstrating the highest level of organization for the world’s best players,” said Tony Rich, Executive Director of the CCSCSL. “Featuring the world’s strongest chess professionals fighting for massive prize funds, along with a full spectator experience led by world-class commentary, this circuit sets forth an internationally coordinated effort that casts a shining spotlight on global chess competition.”

“It’s an honor to be among the giants of chess organizers,” said Joran Aulin-Jansson with Tower AS (Norway Chess). “Having the world’s best chess players in one circuit is a great way to fuel excitement for the future of chess.”

“The London Chess Classic is delighted to be part of this new venture which we feel sure will greatly add to the public interest in top flight chess,” said Malcom Pein, Director London Chess Classic. “We look forward to the Grand Chess Tour climaxing in London and to further tournaments joining the GCT in coming years.”

Participating tournaments are identified as the gold standard for international event organization, setting the model for player conditions, prize funds and spectator experience. Each of the events will cater to live audiences, as well as offer streaming broadcasts complete with grandmaster commentary.