Before more than a thousand spectators, the first round of the Chess Grand Slam Masters Final, which is being held in the Brazilian metropolis of Sao Paulo with the concluding round to be held in Bilbao from October 8 to 13, was played.

The great surprise of day one was the Italian Fabiano Caruana, who conquered after an exhausting match of more than five hours, the number one-ranked player Norwegian Magnus Carlsen. 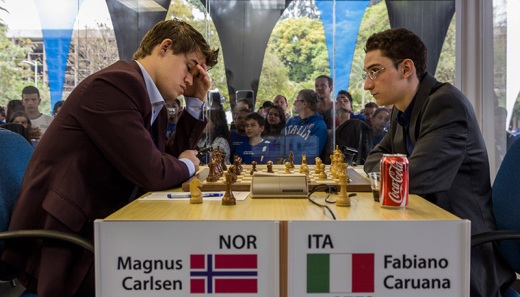 Less surprising, though commendable for having begun with black pieces was the draw finally achieved by Spain’s Paco Vallejo against world champion, India’s Viswanathan Anand.

And it is fitting to describe as crushing the victory achieved, almost by knockout, in a little under two hours of play, by recent Olympic Champion Levon Aronian against Russian Sergey Karjakin.

With these results, the leaderboard after the first round of the 5th Chess Grand Slam Masters Final is topped with three points each by Aronian and Caruana, followed with one by Vallejo and Anand. Rounding out the scores are the day’s two losers Carlsen and Karjakin. 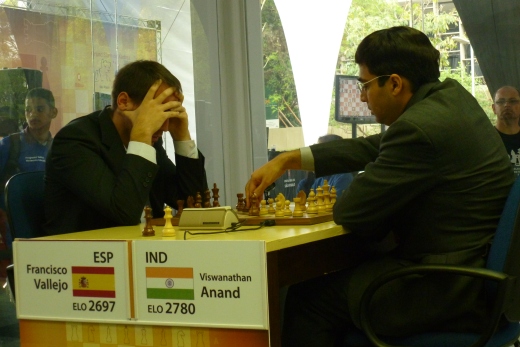 This 5th Masters Final continues to support new rules that try to guarantee a struggle and a show in each match. Therefore, the so-called Sofia rules will once again be applied which establish that only the arbiter will have the authority to determine if a game is drawn, avoiding pacts between players.

Additionally, a scoring system similar to the one used in Football will once again be used, with three points for a match won, one for a tie and zero for a loss, a system first used at the elite tournament in the 2008 Bilbao Masters Final and known since then as the “Bilbao Rules”.

Caruana’s surprising victory over Carlsen, the day’s big news, is even more superlative considering the fact that the Norwegian had the advantage for most of the game. However, an evaluation error on his favourable position made him go after the victory instead of settling for a draw, committing an error which gave Caruana a victory.

The draw obtained by Vallejo and Anand, while not as surprising as the previous match, has nevertheless been a newsworthy fact because the world champion was incapable of beating the number 25 player in the rankings, Francisco Vallejo, even playing with white. It was an even match, without great advantages on the part of either player. As the Spanish player put it – “during the match Anand had the advantage and so did I, but I never saw that as sufficient to win, neither for him to beat me”. 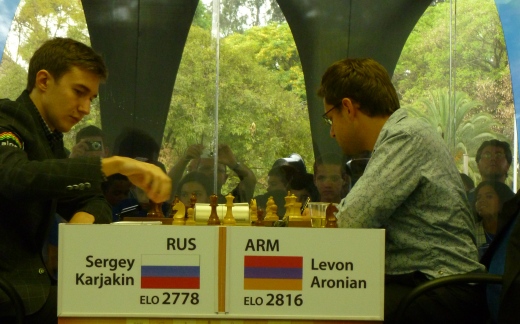 Aronian’s brilliant victory over Karjakin puts in doubt the current defensive approach against the Queen’s Indian opening. The precious novelty introduced by the Armenian on move 16 made the Russian’s defensive approach collapse, and the latter, unable to find an effective antidote, was suffocated by time and had to give up in an inferior position 11 moves from control.

The second round will be played on Tuesday, follow the games live with computer analysis.