Two Indian players were clearly superior than the opposition at the A Group of the Leiden Chess Tournament. S.P. Sethuraman edged his compatriot Deep Sengupta on tiebreaks to get the title in Holland.

Despite losing in the third round against Russian GM Ramil Hasangatin, the Indian was able to recover with five wins and one draw in the final six rounds. This performance was enough to score 7.5 points and share first place with Deep Sengupta.

Bosnian GM Predrag Nikolic was the only player able to arrive a whole point behind the leaders and took home the third prize without needing any tiebreaks calculations.

Marco de Mooij was the winner of the B Group with 7/9 points.

Location and host were once again the Leidse Denksportcentrum (Leiden’s Mindsport Centre) at Robijnstraat 4 in Leiden. 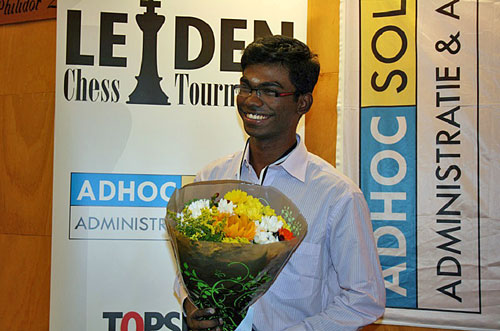