Pablo Lafuente started playing from 5 years of age, became an IM at 18 years and GM at 21 years of age. He represented the Argentine team in the Chess Olympiad 2010 at Khanty Mansiysk, Russia, and in the Continental Championships in Mexico in 2011.

I have participated in the Commonwealth Chess Championships on the last two occasions as a player in New Delhi in India and in Johannesburg in South Africa. My South African student decided to take part in this tournament. He is ten years old, and I was glad to accompany him to India. This is my third trip to India. 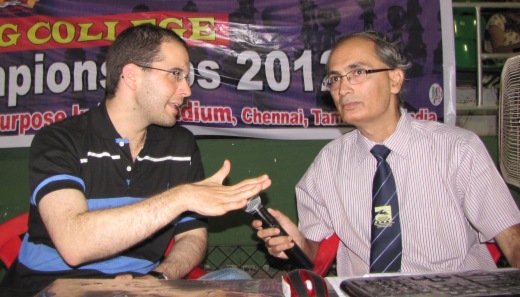 Argentina and chess are an unique and unlikely combination. Please tell us about it.

I picked up the game from my father, who initiated me into chess. I went up-to high school. I couldn’t attend a few world juniors and I come from a normal middle class family. It is expensive to compete in tournaments, but the game itself is less expensive.

In Argentina, we have chess as a subject in many schools, it is becoming more and more popular. Many kids are attending to chess lessons every day from an early age.

Where does chess stand in Argentina.

Maybe around tenth. It is growing, many kids from all walks of life take up to to chess these days. The politicians have realized that it helps children to play chess. It could be better if they support more, but the Federation needs to do more.

What made you turn into a coach so early in life.

It was mainly because I wasn’t enjoying what I was doing. It might happen when it gets too stressful, it doesn’t mean that I don’t like chess anymore or something like it. It’s just that I have taken a break, I took to coaching as the offer came my way during my play in South Africa. I am now enjoying chess from a different perspective. I am enjoying this experience also.

About shaping your life through chess.

When we look back, I might want to change a few things. I am happy the way it went so far, I have traveled a lot, it helped me a lot to become more mature and had an impact on my character. Of course, chess has helped a lot, but the relationships with friends, people and everything in life plays a part. 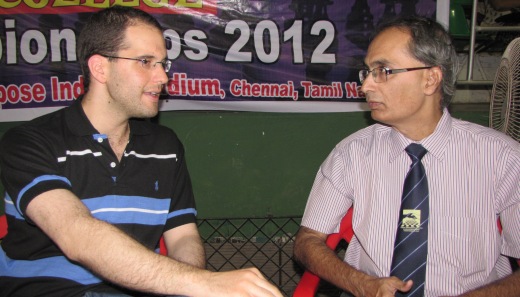 From Buenos Aires to Barcelona to Port Elizabeth. Your journey has been varied and long. What next.

Eight years ago I was in Johannesburg Airport, in transit, on way to India. I was wondering in, as to what I am doing in South Africa, so far away from my home. And now it has become my temporary home.

It’s absolutely impossible to know what will happen next in life. In fact it could be boring to know what would happen in future.

Who is your idol, favorite sports person.

I don’t have anyone like that. But I like Aronian, Kramnik and Anand. I like and enjoy watching their games. You cannot enjoy Cristiano Ronaldo or Lionel Messi, if you need to choose.

I have preferences, but I try not to let them influence me. I wouldn’t want to take any side, it actually is quite silly to a side. I would rather appreciate both.

About your experience in South Africa.

I am there for an year and half now. I like South Africa, it has great potential for chess. Many kids, almost 2000 kids, took part in the Nationals last year. Also, I am trying to develop some coaching project in different cities in African continent.

About your future programs.

I would be in South Africa for some time, shall keep in touch with the game from there. I am likely to go to smaller towns and popularize chess.

On your visit to Chennai.

This is my first visit to Chennai. Due to continuous rounds, I couldn’t enjoy going about in the city. I plan to stay back for two days after the event and shall look to move around.

I think India is a tough place to compete, from the chess point of view. Also it is tough from human point of view, like poverty etc. This is my third visit to India, and I have learnt a lot. I am surprised when I see that some people have so little, still they are very happy. It is an absolutely amazing experience.

It would be really nice to see many many players from all the countries.

Who are your favorite authors.

Indian authors and Bhagavad Gita is one of my favorite book.

On some chess books that impressed you.

A book by Tal and Adamski translated in Spanish called by the name “Attack”. I really enjoyed reading this book.

Tell us something for a beginner and an upcoming chess player.

In order to become a good player, they have to enjoy the game and spend a lot of time in chess. It is extremely vital for them to keep on enjoying what they do. I think it is important for the player to go overseas and play different tournaments. It could be expensive, but it is vital. Also, keep up your motivation all the time.

We wish you the best in your stay here.