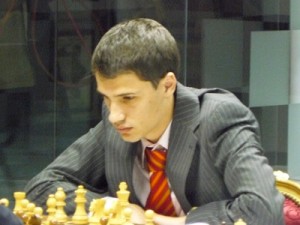 Ivan Cheparinov, the winner of Gibraltar Open 2014, gave an extensive interview for the Bulgarian version of Chessdom just a few days after the important victory he achieved.

We publish a shortened version of the interview, the full text is here

Hello Ivan, congratulations for your victory! What is the feeling after winning against so many titled and renowned players?

It feels great! I have had other important tournament victories in my carreer, but this Open was one of the strongest in the past years, so the victory really makes me happy.

When you went to Gibraltar, did you believe that you can win the event?

Lately, in the past one or two years, things were not turning so well, thus I went to this tournament with the idea to play the best possible chess. Honestly, I did not have the ambition for the first position, I just went to play and enjoy and give the best of myself.

Who was your most difficult opponent?

I think after round 7, when I made a draw with the Chinese WGM Tan Zhongyi, I already knew I have to win all the games if I want to reach a tiebreak. At this moment I lost a little faith that this is possible, but I decided I have to continue to enjoy and things might just happen. In round 8 I played with the very strong and in form GM Khotenashvilli (replay the game). The game was not going well, and I was fearing that I will not win, but in the end I got the full point. In round 10 during the game with Kamsky I was convinced nothing can stop me, because I had realistic options for victory.

And what was your sweetest victory?

The sweetest victory came in the tiebreak against Vitiugov. I was totally sure that I will win this game, but only my friend GM Salgado, with who I train for 3 months already, knew that too. We were just convinced in the final victory.

Do you want to dedicate your victory to someone?

I want to dedicate it to all people that supported me and the trainers who have been with me in difficult moments. They know who they are, and this victory is dedicated to them.

What are your goals and ambitions now?

I do not have time to enjoy the victory in Gibraltar, as the European Individual Championship in Armenia is coming soon. I hope I will show a similar level of play to the one in Gibraltar. For me the most important is to qualify for the World Cup, and this championship gives 23 qualification spots.