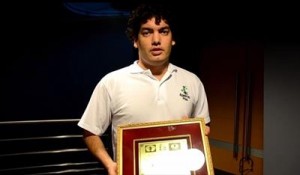 Sandro Mareco has just won the 8th HDBANK Cup. After winning the cup, he shared his thoughts in an interview with Chessdom.com’s editor GM Marian Petrov. Sandro Mareco talks about his recent tournaments and his future plans.

Marian Petrov Sandro, congratulations on your victory in Vietnam!

Sandro Mareco I was very happy to win it and I want to thank the organizers as the conditions were very good. It was strong tournament because a lot of players have rating lower than they play. I played many good games, I think my best game was against Gordievsky (scroll down to replay)

MP This is yet another victory for you. And you are very active! You also have recently won the Copa Marcel Duchamp for the second time. You played also in Aeroflot open.

SM I like very much to play in Uruguay because they are similar to Argentina in a lot of things and for that reason for me is like to be local player. The organization was good in general, I feel that my best games from the tournament were against Slipak, Oddone and Gilberto Hernandez, it was necessary to fight, because in some moments i had worse position during the games.

In Aeroflot I did well, because just like in HD Bank Cup I played against a lot of u20 players, which are underrated and all the time are trying to improve. I lost 2 points of elo, so it was not fantastic, but normal tournament considering the opposition.

MP How do you choose your tournaments, you playing few months in South America and then few months in Europe. Do you have preferred places to play?

SM Normally I am trying to choose strong tournaments and also in places that I feel that would be comfortable for me to play. In South America I look for conditions and prizes because I feel very well in any part of South America.

MP How do you prepare for your tournaments and what are your routines daily?

SM I study a lot of chess everyday, solving tactical problems and analyzing positions. Also, I run 4 or 5 days per week 6 or 7 km, normally I do that.

MP How important are computers in your preparation?

SM I use a lot the computer engines, but normally I do my moves and then check what the computer thinks. Sometimes i don’t agree and try hard to prove that I am right, sometimes I even win!

MP What are your plans for the next few months and are you going to play the Olympiad?

SM I am going to play Dubai , Budapest , Foz de Iguazu in May , the Continental championship in June and also Olympiad. I will play other events as well, still thinking what to choose.

MP Who is your favorite in the Candidates tournament?

SM I like a lot of players, but Mamedyarov and Aronian are my favorites. These Candidates are really good, they are fighting well, you do not see easy draws.

MP How is chess developing in Argentina and in South America?

SM It is good, not so fantastic because we are far geographically and ELO wise, but at this moment we have some good young players. The most promising in my country is Alan Pichot , but also Tomas Sosa, Pablo Acosta are good players. We have a lot to improve, but I am trying to help with a few things and to motivate the other players. I am speaking a lot with them.