Saint Louis, September 13, 2011 — What a difference a day makes! Only one day after their strong showing, the Queens had a ‘very bad day at the office.’ A near perfect 4.5 – 0.5 result in the chess960 round, combined with a 3.5 -1.5 score in the rapids added 6 full points to Kings’ lead, for a total of a mountainous 10-point advantage. Kings vs. Queens tournament.

Indeed, it would take a heroic performance by the women to reverse such a margin. Once again the final day’s tally does injustice to the Queens, when we consider the positions on the boards in several of the games.

Today’s novelty idea for the drawing for the chess960 position was a ‘wheel of fortune’ roulette wheel, spun by Eric van Reem, who among other projects revised the chess960 rules for the FIDE handbook. Each spin helped determine the placement of each chess piece.

One can find few flaws in GM Hikaru Nakamura’s chess960 victory over GM Alexandra Kosteniuk. He gained an early advantage when he forced his opponent to relinquish her dark-squared bishop. Soon thereafter, the Kings’ top board’s control of the only open file brought dividends in the shape of a healthy pawn. The best the Russian could do was to liquidate to an opposite-color-bishop endgame, but alas it was one that Nakamura managed to convert in record speed.

Their rapid battle was not at all one sided. Ambitious as always, Nakamura played the King’s gambit – an opening that was a lot more inspiration than preparation! No sooner than move 14 did he have to gamble with a sacrifice of a knight for two pawns and a strong center. There was enough compensation for the material, but after some inaccuracies black’s position was tenuous. The pendulum swung on move 21: 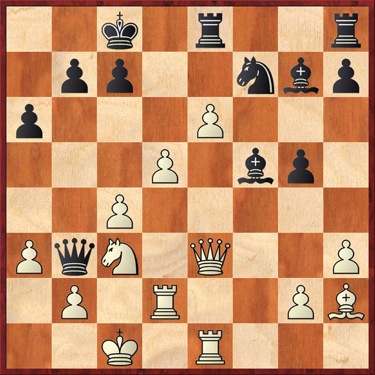 In the GM Kateryna Lahno – GM Ben Finegold, game one saw black somewhat better for most of the game, but it is unclear if his initiative was enough for a full point. After some further inaccuracies by white, a rook ending ensued, where victory seemed just a matter of technique by black. This is where the old cliché that ‘all rook endings are drawn’ once again proved wise. As Lahno’s husband, GM Robert Fontaine, showed after the game, white missed a golden opportunity: 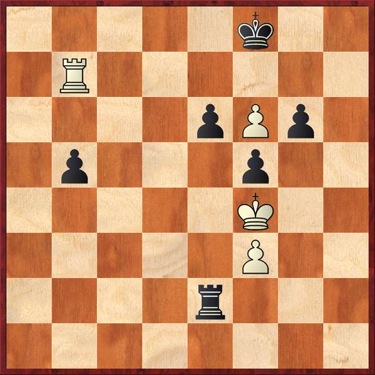 Game two was a pacified Gruenfeld, where black more than equalized, and slowly outplayed white to get to the following position: 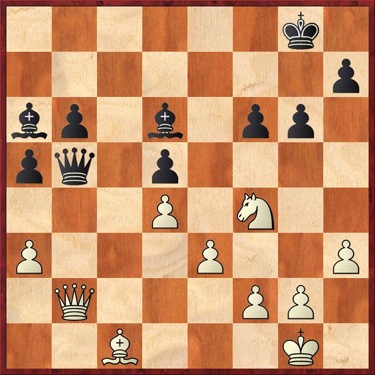 The continuation of 33…Qf1+? 34.Kh2 Bc4 35.Qxb6! won black a piece, but gave white a perpetual check and the desired draw. The better alternative was 33…Qc4!, leaving white tied up and hurting for good moves. 34.Kh2 b5 and black would have been on the verge of victory.

IM Jacek Stopa had a strong showing versus the out-of-form U.S. Women’s Champion IM Anna Zatonskih. Their chess960 game was an example of how fast one can get into trouble when they can’t find a proper set-up: 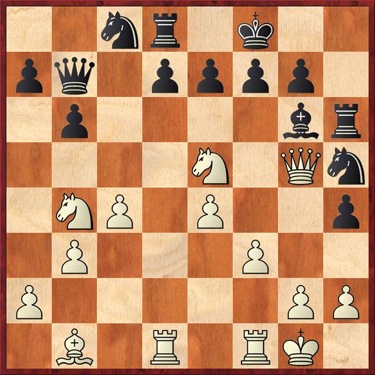 Zatonskih sought redemption in the rapid game by playing very aggressively and offering a pawn, which was declined. She then pushed the black queen to h7. The rest of the black pieces however, remained active, and black offered a pawn of his own – which was accepted. The major piece ending was heading to a draw, when white blundered with 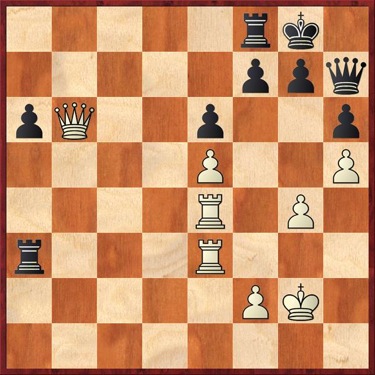 It is not often that a player gets a position with three minor pieces for a queen in a game. IM Marc Arnold managed to get that twice in two days! His opponent, IM Irina Krush temperamentally pseudo-sacrificed an exchange, only to fork white’s rook and bishop and win a piece, but white’s counter play was sufficient. The real excitement started when the black queen found itself overloaded, and black was forced into the following sequence: 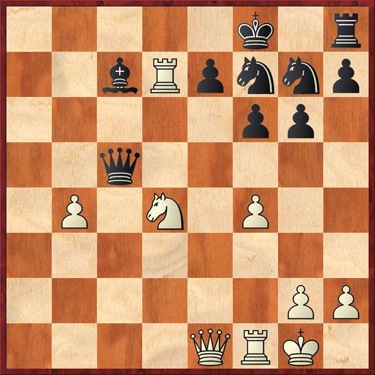 With the white pieces for the rapid game, Arnold said he decided to choose a less common opening, and play more quickly. It proved to be the right decision as he refuted Krush’s hyperactive plan of 11…Qa5?! and gained a steady plus. He could have remained up a queen for a rook and a bishop, but he preferred to give it back for a better endgame. Black had the draw within reach, but a careless series of moves brought on a winning bishop ending, and Arnold brought the point home.

Today marked the first victory for Kevin Cao in his split match with IM Martha Fierro. It was achieved in their chess960 encounter, where Cao built a very strong and mobile center, which he mercilessly pushed forward. His space advantage on the king’s side bore fruit on move 30: 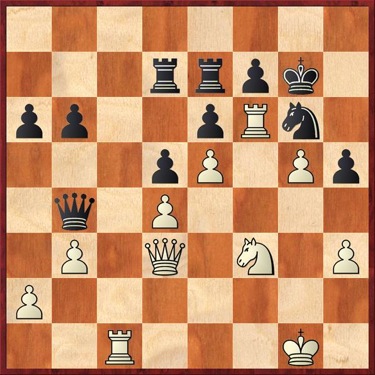 In the second game black was overconfident with his 14…f5?, allowing white to later take full advantage of its superior development: 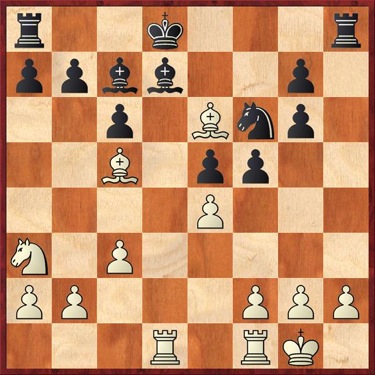 Today is a free day, and the players will have a chance to rest or enjoy a trip to the Gateway arch. Play resumes on Wednesday, and the Queens have their work cut out for them. Lest one forget, however, that in addition to the team prizes, there are also individual place prizes (and of course pride!), so there is plenty to play for!

About The Chess Club and Scholastic Center of Saint Louis

The Chess Club and Scholastic Center of Saint Louis is a non-profit, 501(c)(3) organization that is committed to making chess an important part of our community. In addition to providing a forum for the community to play tournaments and casual games, the club also offers chess improvement classes, beginner lessons and special lectures.

Recognizing the cognitive and behavioral benefits of chess, the Chess Club and Scholastic Center is committed to supporting those chess programs that already exist in area schools while encouraging the development of new in-school and after-school programs. For more information, visit www.saintlouischessclub.org.