The number one in the world ranking, Magnus Carlsen of Norway, emerged victorious from the quick-playoff with Vassily Ivanchuk of Ukraine and was declared the winner of the 2011 Grand Slam Final Masters.

Earlier, Carlsen and Ivanchuk drew their last round games against Nakamura and Aronian, respectively, to conclude the tournament with 15 points each. World Champion Vishy Anand defeated the local representative Paco Vallejo. 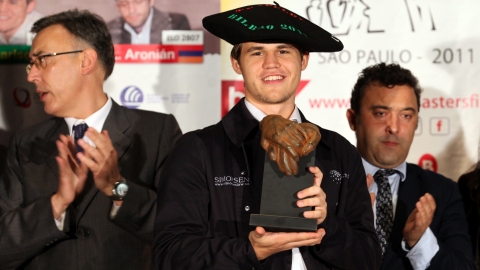 Magnus Carlsen with the winner's trophy and traditional txapela

The rules of the Grand Slam Final Masters state that “If two players tie for first, they will play a blitz match immediately after the last round finishes. They will play two games at the rate of all the moves in 4 minutes add-on 3 seconds for each move from the first, alternating colors, which shall be decided for the first game by draw. If this match is tied, they shall play a one game Armageddon (sudden death), White will have 5 minutes and Black 4, in the case of a draw Black wins first place. This game’s colors shall be decided by lot.”

The first tiebreaker produced a draw, but in the second Carlsen skillfully punished white’s tame play and scored an all-important victory.

The first leg of the tournament was played in Sao Paulo, Brazil, and the second half started on 6th October in Bilbao, Spain. 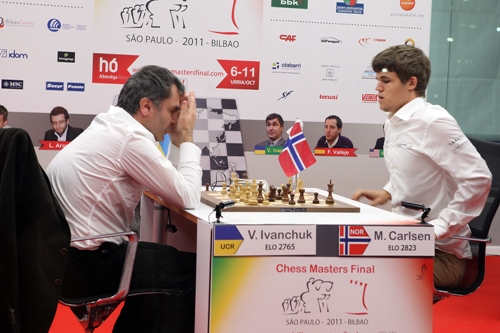 Ivanchuk in difficult position against Carlsen

The final standings are led by the overall winner, Carlsen, with 15 points, the same score as Ivanchuk who finished second. Behind them, Aronian, Anand and Nakamura are sharing the third place with 12 points each. The Spanish Francisco Vallejo is closing the standings with 10 points.

In the closing ceremony, which was attended by the Director of Tourism of the Provincial Council of Bizkaia, Arenaza Gabino Martinez, the champion Carlsen said before the large audience that “the key to my victory was my effort with black against Ivanchuk, which made me believe again in my chances of claiming the tournament.”

Replay the games with GM commentary and computer analysis 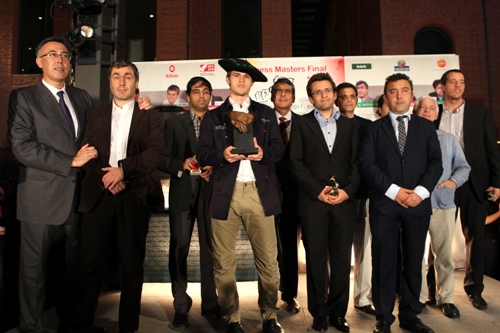 Oliver Gonzalez Memorial – Tournament Regulations in English
Regulations   1)    The Tournament is open to all players. Valid for FIDE and FEDA ratings and international norms. 2)    Dates: 8 to 16 October 2011 3)    System ...