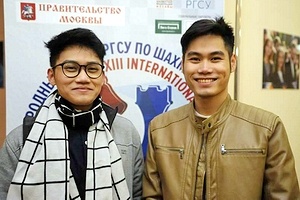 Representatives of more than 30 foreign countries participate in the RSSU Cup, Moscow Open. The press talked to two brothers, chess players from Vietnam, Tran Tuan Minh and Thang Minh Tran, playing in the main tournament – the Men’s Cup of Russia.

– Thang, Minh, hello! Are you for the first time in Russia?

Thang Minh Tran: We’ve been to Russia many times: took part in the Mikhail Chigorin memorial in St. Petersburg, played in the Junior World Championship in Khanty-Mansiysk, and even had a chance to play in the Team Blitz Chess Championship of Moscow.

– It’s interesting! And how did it come out that you played in the Team Championship of Moscow?

Tran Tuan Minh: Moscow is the best place for chess players from all over the world, including me. Usually strong players participate in Russian tournaments, here we can gain some experience. Besides, I always spend great time in Moscow, we have many friends here.

Thang Minh Tran: Russia is the biggest chess country in the world, with a dozen of the strongest players and hundreds of grandmasters. I would compare your country with a five star resort for all of the chess players. I never miss a chance to play in Russian tournaments.

Thang Minh Tran: Now I’m going to the sports school where I study academic subjects and play chess. I’m not sure I will enter any university in future as I consider myself to be a professional chess player and want to continue it with the chess.

– Tell us about your trainings, please. Does anyone of the Russian coaches help you?

Thang Minh Tran: Usually I’m training 5-6 hours per day. I am playing on different chess internet portals, obligatory solve 20 chess problems a day to improve my tactic skills. Besides, now I’m working with the grandmaster from Ukraine Alexander Moiseenko. I consider him to be a very strong player and coach.

– Which of your chess achievements can you single out?

– What about Russia do you like above all? Do you plan to come here again?

Thang Minh Tran: For me it’s more important to meet my friends in Moscow, next year I want to come back to the Moscow Open.