On Sunday, IM Daniel Naroditsky went clutch to win his final game of the 2013 U.S. Junior Closed Championship, breaking a tie with FM Luke Harmon-Vellotti and earning the crown in clear first – proving, once again, that slow and steady wins the race. Article by Brian Jerauld.

Naroditsky finished with 6.5/9 after going directly for the win with the black pieces in round 9 against Robert Perez, while Harmon-Vellotti was stalled with a draw to FM Jeffrey Xiong.

FM Sam Sevian’s last-round win over WFM Sarah Chiang completed a tenacious come-from-behind effort – four wins and two draws to close the tournament – but he was ultimately only able to catch Harmon-Vellotti to tie for second at 6.0.

“It was quite grueling – especially being the favorite coming in, where the pressure is on and everyone expects you to win every game,” Naroditsky said. “I just tried to stay calm and tranquil in every moment.” 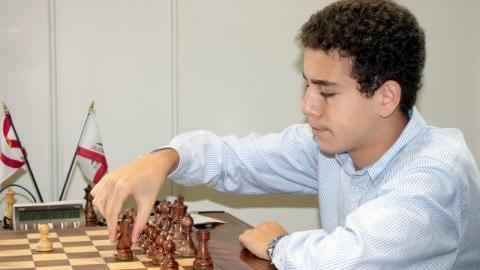 All said and done, it comes as no shocker that Naroditsky became this year’s champion. The California 17-year-old was a three-time veteran of the tournament and the highest-rated player in this year’s field, at 2494. What comes as a surprise is how he did it.

In an often dramatic and decisive tournament that featured sharp play and homerun swings nearly every afternoon, each of Naroditsky’s games instead plodded along at a careful and steady positional pace. Offering an array of polished openings throughout, he kept his opponents in constant speculation as to which game they would play: One that spent 50 moves battling slowly over the smallest of advantages – or one that could be just as quickly traded down to a draw in 20. His methods earned him four wins and five draws, the only unbeaten player through the tournament.

By the end, his approach looked systematic – drawing against the top five finishers and collecting full points from the bottom four. He never once fell lower than second place, yet also never led the field by more than half a point. The closest game he wore as a loss came after a winning position against FM Yian Liou, who finished in sixth place, narrowly slipped away into a draw. It allowed Harmon-Vellotti to catch pace for the last round; Naroditsky had been in clear first and the draw left him rattled, vowing to return on Sunday to win at all costs against Perez.

“I feel great, happy with the fact that was able to work hard under pressure and get back on my feet after some tough draws and tough moves – something I have not done in past Juniors,” Naroditsky said. “I was really happy I was able to get my stuff together and find some winning spirit for a nice win at the end.”

Naroditsky selected the King’s Indian Defense in seeking a win over Perez, who held the tension in the center when black pushed 9. … e5. Naroditsky opted to break it open with 12. … exd4, and soon both of his knights enjoyed central outposts on c5 and e5. The thematic 17. … f5 swung the game in Naroditsky’s favor, ultimately winning the white e-pawn and granting black control of the open a-file – all but ending white’s standard attack plans on the queenside.

With Perez in massive time trouble, Naroditsky leaned on his pawn advantage in a slow positional advance, lodging his knight on a devastating central outpost with 29. … e4. It brought safety to the last square needed for a net on the white queen, and after Perez – playing on increment – blundered with 32. a1?, Naroditsky won the lady with 32. Bc5. It was the third time this tournament Perez hung his queen.

Sharing the lead entering the final round, Harmon-Vellotti also played directly for a win but came up just a few tempos short as the black pieces in his eventual draw against Xiong. The tactically adept Idaho 14-year-old thrived all week in complicated positions, and once again steered the game into a closed mess with his trademark French Defense.

Though black enjoyed some advancement on the queenside, an early rook lift by white eventually found 15. Rg3, of which black’s response in 15. … Bf8 blocked any castling plans for his king. Harmon-Vellotti’s monarch never did make it out of the middle – a weakness Xiong had fully exploited by the game’s adjournment – and his h8 rook never once moved out of the corner.

The queenside was breaking open by the 20th move, and while black lost its a-pawn to 25. Rxa5, it was able to create a particularly bothersome passed pawn with 27. … dxc4. Desperate for a win, it became the object of Harmon-Vellotti’s attention, but not without first dealing with Xiong’s own passer on the seventh rank: 33. d7 offered an awkward check by a violently poisoned pawn.

In the end, the pressure on Harmon-Vellotti’s king, still on the e-file and pinned down by the white queen, proved too much. Ironically, Harmon-Vellotti’s army ran out of initiative just as Naroditsky stood up from his board, with congratulations. The game was drawn by repetition after 44 moves, just a few minutes after the championship had been claimed.

“I was about to offer a draw at that point anyway; I only had one way not to lose,” Harmon-Vellotti said. “I played my best and, at the end, it was a draw. I’m not disappointed with this tournament, I still played well for the most part.”

Sevian delivered a quick and convincing must-win as black over Chiang in his final round – for the moment putting him in clear first – and then sat for nearly an hour to nervously await the Naroditsky and Harmon-Vellotti results.

Chiang now has plenty of resources to learn the Nimzo-Indian lines as the players ganged up on her with the defense all week. Fighting came quickly, as Chiang’s 7. d5 pushed the envelope on black’s center, but opened up a diagonal that brought Sevian’s 8. … Bxf1 and forced Chiang’s king to move before castling. Soon her e-pawn was attacked without enough defensive resources; Sevian won it with 13. Nxe4, kicking off some nice tactical work that also traded the queens and minor pieces from the board.

A few half-steps from white allowed black to finish its development, and soon Chiang’s d-pawn was sucked too far into the black camp. She missed moving her rook out of the pin on the e-file at 24. Re4, instead allowing Sevian to force a trade of the knights and spell doom for the advanced pawn. Sevian went on to create a tomb of pawns around the white rook with 27. … c4, and then beautifully sealed it off with 31. d5.