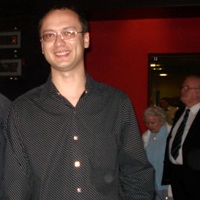 The tournament was held on 6-11 April 2010 at the Parramatta Town Hall with a total prize fund of A$14,000. Principal sponsor was GM Murray Chandler.

The final round started with a quick peace treaty between the Australian champion GM Zhao Zong-Yuan and England’s GM Gawain Jones, which secured them both with a tied first place. But then the things heated up and the viewers followed the remaining games with great excitement.

The experienced GM Vladimir Malaniuk calmly repelled the attack of China’s Li Chao B and converted the extra pawn into a full point. This score eliminated the Doeberl Cup winner from the battle for the first place. FM Daniel Howard Fernandez continued his fantastic run and managed to hold GM Abhijit Kunte to a draw on the second board. With this appearance, Fernandez grabbed an IM norm.

But finally, GM Dejan Bojkov, who was a sole leader after round six, redeemed for the setback in the 8th round and beat GM Dibyendu Barua with black pieces to catch Zhao and Jones on the shared first place. Furthermore, Bojkov is declared winner on the superior (only 0.5 points margin) Buchholz result!