The University of Texas at Dallas Chess Team dominated the competition over the winter break, winning the 2010 Pan-American Intercollegiate Team Chess Championship with a perfect 6-0 score.

“This is the best Pan-Am result in the history of our team – despite the challenge of facing nine Grandmasters and three International Masters in the last three rounds of the tournament,” said Chess Program Director Jim Stallings. “Our teams played well, thanks in part to excellent preparation by Coach Rade Milovanovic.” UT Dallas fielded three teams.

Milovanovic strategized the teams’ approaches well before the members met their opponents over the chess board. He determined which UT Dallas player’s style matched best with an opposing team member’s, and gave players rest periods during the tournament to ward off fatigue caused by the four- to five-hour games. 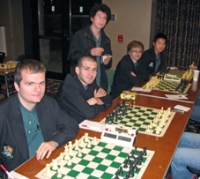 The victory was especially sweet for GM Alejandro Ramirez and IM Marko Zivanic, who were hoping for a win in their sixth and final year of eligibility for collegiate chess.

“This Pan-Am was the strongest ever, so although all of us hoped we would win it, we could not guarantee it since the competition was very tough,” said Zivanic. “I was glad and proud because all the hard work that we did this semester paid off.”

Ramirez said the team accomplished what it set out to do. “We have put forth an enormous amount of effort to triumph in this championship, including training sessions with each other and with coaches. We’ve brought in GMs from Russia to train with, and we have devoted ourselves to representing UT Dallas in the best way possible – all while keeping our grades up,” he said. “It is quite an endeavor.”

Bercys tied for best third board position at the tournament. The UT Dallas C Team was named Best All-Around Women’s Team. The Pan-American tournament, which debuted in 1946, is one of the oldest chess tournaments in the United States.

By winning the Pan American tournament, UT Dallas secured a spot in the annual Final Four of Chess, also known as the President’s Cup. The event will take place in Washington, D.C., April 1-3 and will also feature teams from Texas Tech, UMBC and UT Brownsville.

“The Pan-Am victory is no reason to work less in the coming months, because the teams that will play in the Final Four are surely seeking to pounce back at us,” said IM Julio Sadorra. “Until then, I plan to do self-evaluations and to study my recent games to further improve my play.”

The chess team’s next outing is Jan. 21-23, when UT Dallas hosts the Texas Team Championships in the Galaxy Rooms of the Student Union. Attendance is free and open to the public.