Clubs are lacking in infrastructure

This year, the Old Continent’s club championship was held in the Greek city of Kallithea. Typically, this tournament is in the focus of the chess public. It is sufficient to say that only Veselin Topalov and Peter Leko do not participate in club competitions, while the rest of the chess elite is always in attendance. But this fall, chess tournaments’ schedule, all large events after another, literally overlapped on each other’s heels. On one end, we had Russian Superfinal Championship, on the other – the World Chess Olympiad, with the parallel World Championship match.

Kallithea, almost a suburb of tourist Mecca – the city of Thessaloniki, is not for the first time host of the big chess events. I still have strong impressions from seven years ago, left over after the youth European championship held there. Actually, this model of a major chess tournament is very popular – hotel on the beach, buffet, where you can see a mere fan of chess as well as Magnus Carlsen, and the spacious conference hall, inside which we played our games. An atmosphere of absolute democracy reigns everywhere, except on the chessboard. There, the strongest professionals are not backing to anyone. 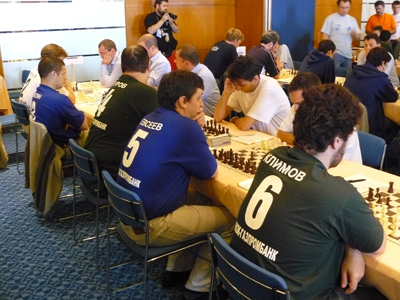 In general, the European Club Cup has some specific features that differentiate it from other tournaments. In addition to short competition (7 rounds), there was a complicated system of drawing lots. Going into all the details would take too much space. I can only note that in an already tangled situation, with so many teams and their respective captains, the drawing of lots made it into complete chaos. Yet, even under such conditions, the objectively strongest teams fought for the lead during the competition. The traditional ECC favorites – “Ural” from the Sverdlovsk region and the German “Baden-Baden” – got Armenian “Mika” with Levon Aronian, Magnus Karlsen and Boris Gelfand to lineup next to them.

Further on the issue of clubs, you will notice paradoxical thing – the almost complete absence of the chess clubs in the commonly perceived presentation. Teams competing in the national championships and in the European Club Cup, are very often not a collective, but simply a set of artists. And the problem is not in the individualism of players, but the fact that teams are gathering only for the tournaments. There are simply no other club events. Naturally, in such a situation, clubs are lacking in infrastructure, and the changes occur far too often, because players are rarely contracted for longer than a year. Add to this that language barrier often stands in between team-mates. What to say, chess clubs and their members should work to improve in this aspect.