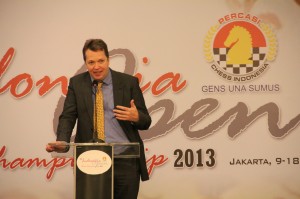 Nigel Short, currently rated 2684, needs no introduction as he is a well traveled globe trotting Englishman and a frequent visitor to Asia. He is not only a chess player, but is also a national team trainer, who has written extensively about the game while continuing to be in demand as a commentator at major events.

He is in Indonesia for the third time, at the third edition of Indonesia Open 2013! So what are the impressions of this still young 48 year old champion?

Chessdom: This is your first IOCC. How do you like it here?

Short: Yes, I am happy and feeling good about being here after not coming to Indonesia for quite a few years now.

Chessdom: What do you think is the level of IOCC?

Short: This is already a very strong tournament and has the potential to be one of the very best in the world. You have already attracted many top players and have a big prize fund. I have no doubt IOCC will only get stronger.

Chessdom: You are one of the favorites to win IOCC. Do you think playing double rounds some days will be difficult for you? We understand Europeans are more used to single rounds.

Short: Not just European players have difficulty with double rounds. All chess players, whether from Africa, Asia or America and we all have the same problem but many open tournaments today have double rounds so we have to accept this. I will say that the World champions, the elite like Magnus Carlsen, Garry Kasparov and Anatoly Karpov would never do this. In my view, if there are going to be double rounds then perhaps a fair compromise is to have 9 rounds and not 11 as the physical demands on participants will be significantly less. But don’t misunderstand, I am happy to be here and taking part in IOCC.

Chessdom: What are your impressions of chess in Indonesia?

Short: I know that chess is developing well in Indonesia with many young players but in my opinion the potential of Indonesia chess players is yet to be fully exploited as there are many talents who should be doing much better. IOCC is the grand centrepiece, but Indonesian chess also needs to have variety to better cater for all, including having more trainers and many more international tournaments. This is a vast country with a love for chess so there is no reason not to be able to have world beaters.