The grand Ceremony Opening of the XIII International RSSU Cup, 2017 Moscow Open traditionally was held in the assembly hall of the Russian State Social University main building. The program started with the Russia dance performance by show-ballet of Irina Knyazeva. 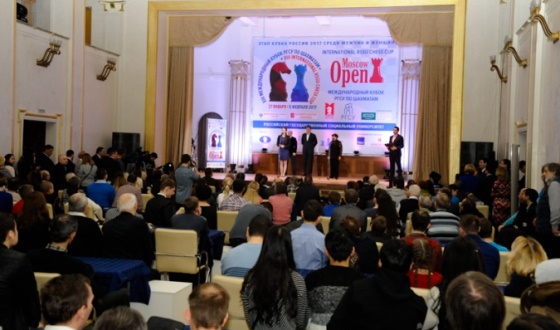 “It’s pleasant that from year to year the tournament is becoming more and more significant, and an even bigger number of guests from many countries of the world take part in it, – Nikolay Gulyaev was the first to take the floor. – I would like to wish beautiful games to all of the participants, and in my opinion, no matter who wins – chess will win in any case,” – Nikolay Alekseevich concluded.

“Moscow is the world’s most hospitable and sports city, and it’s also a capital of the chess in the universe. In many respects it’s thanks to the contribution of the department of sport and tourism of Moscow, management of sports and entertainment events and the RSSU Rector Natalya Borisovna Pochinok,” – Nikita Kim said. Those words were greeted with the applause of the auditorium.

Natalya Pochinok marked that every year the tournament is increasing and sets up new records. “Today our tournament is one of the biggest in the world according to the number of participants. Chess players representing 31 countries take part in competitions. For the first time within the frames of the festival we organize a unique tournament for partially sighted and blind people. And I would like to express my gratitude to the Government of Moscow, the All-Russian Society of Blind People, the Russian Paralympic Committee for this step we are taking together for the development of our unique kind of sport in Russia and worldwide.”

Finally Natalya Borisovna wished best of luck to all of the participants. She didn’t leave foreign players without attention and pronounced her speech again, this time in English. In conclusion, the words “The XIII International RSSU Chess Cup, Moscow Open is open!” were pronounced.

After that the guests could enjoy the performance of the Moscow chamber Schnittke orchestra that executed the works by Mozart, Tchaikovsky,  Schnittke and Brahms.