The awarding ceremony for the winners of the children’s tournament of Moscow Open 2014, the RSSU School Champions Cup, was held on Saturday in the assembly hall of the Russian State Social University.

More than 700 children of 5 to 15 years old were competing on the course of nine days in the hospitable social university for the prizes that included participation in the European School Championship that will be held this summer in Greece. 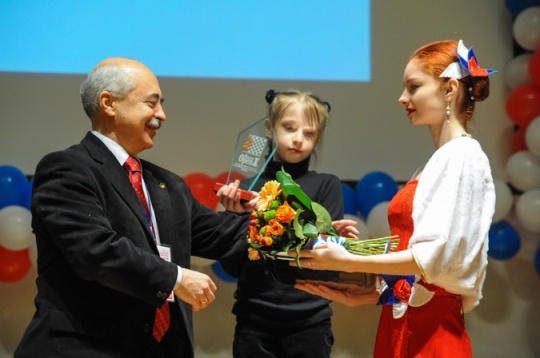 Alexei Pisarev thanked the participants of the competitions, children and their parents. He said that involvement of children into the game of chess and healthy way of life is the priority goal that is successfully achieved at the festival for the tenth time in a row. “We don’t say goodbye, and will be waiting for you to come back next year!” –the Pro-rector added.

Theodoros Tsorbatzoglou thanked everybody for the participation and invited the prize-winners to come to Greece to compete in the European School Championship.

Director of the festival Alexander Kostiev highlight that the RSSU has been organizing the biggest children’s tournament at the highest possible level for ten consecutive years. The organizers have been also arranging the trips for children together with their parents and coaches to the European and World Championship to many different countries, such are Greece, Turkey, Poland, Romania. Next year the trip to Singapore has been planned. “We will continue to follow this tradition” – Kostiev added. 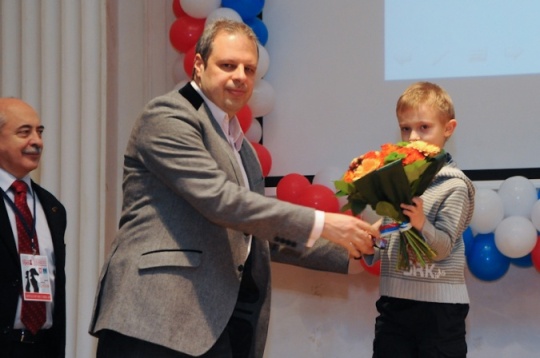 Muscovite Georgy Vdovin took the first place in the youngest age category – among Boys U9. He gained 8 points to keep half a point distance ahead of three opponents. Ilya Makoveev (Krasnodar region) won a silver medal according to additional index. Alexander Kataev (Murmansk region) won a bronze medal. Kirill Kostenko (Moscow) with 7.5 points finished behind the prize winners’ line.

Eva Stepanyan (Stavropol region) with 7.5 of possible 9 points became the winner of the Girls U9 tournament. Sofiia Dashina (Krasnodar) and Maria Sovina (Ivanovo) with half a point less won a silver and a bronze medal correspondingly. Emilia Zavivaeva (Nizhny Novgorod) also earned 7 points, but additional index prevented her from being among the prize winners. 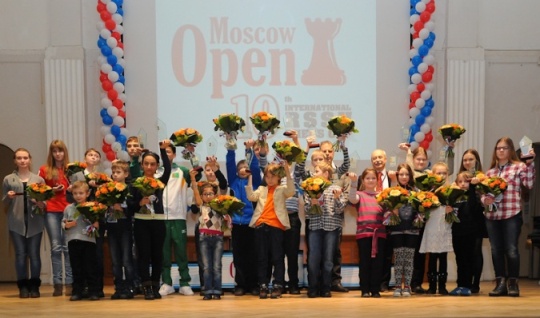 Danila Moiseev (Tula) won a gold medal in the Boys U13 tournament. He finished clear first with 7.5 points. Five players gained 7 points each. Additional index favored Anton Konaplev (Smolensk) and Maksim Klimenko (Altay region). They became a silver medalist and a bronze one correspondingly. Yevgeniy Roshka (Ukraine), Aital Mestnikov (Yakutsk) and Arseniy Nerushev (Orel) were the next ones in line.

Saparmyrat Atabayev (Turkmenistan) took the first place in the eldest age category – among Boys U15. He earned 8 points in 9 rounds. Ruslan Shavshin (Dagestan) with half a point less is a silver medalist. Bulat Nizamov (Kazan) with 7 points is at the third place.

This year Irina Dorogovoz (Khanty-Mansiysk), who had won the Moscow Open several times already, showed absolutely the best result of the competitions. She earned 8.5 of 9 points in the Girls’ U15 tournament. Viktoria Zajtzeva (Kaluga region) with 7 points received a silver medal.

Anastasia Mamontova (Chelyabinsk region) with 6.5 points became a bronze medalist. Thanks to the additional index she managed to leave Ayana Khangueva (Irkutsk region) and Antonina Resmyatova (Krasnoyarsk) behind.

Photo report by Galina Popova on the tournament website