The highly anticipated Saint Louis Rapid and Blitz kicked off today and marked the return of chess legend Garry Kasparov.

Chess fans gathered at the Chess Club and Scholastic Center of Saint Louis early to once again watch the legendary World Champion at the chess board. Even though Kasparov drew all his games, the intensity could be felt throughout the room and it was quite the show for all audiences.

At the end of day one, Levon Aronian, Fabiano Caruana, Ian Nepomniachtchi and Le Quang Liem are tied for first place. 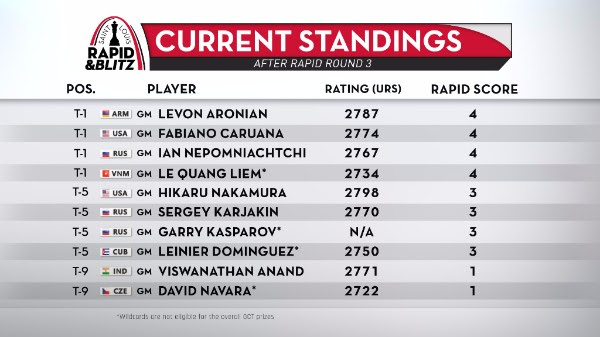 Even though all eyes were on Kasparov’s game, Levon Aronian’s brilliancy did not go unnoticed. He completely demolished newcomer David Navara by first sacrificing a piece, then a rook and checkmating him on move 31.

Hikaru Nakamura had a better position from the opening against Viswanathan Anand and sealed the deal after the former World Champion blundered.

Fabiano Caruana experienced the first heartbreak of the day when in a completely winning position where he had a queen for a rook, he made a sloppy blunder and found himself in a mating net.

Garry Kasparov had the edge against Sergey Karjakin but his rustiness showed when he played too positionally instead of dynamically and allowed his opponent to equalize. Ian Nepomniachtchi drew Leinier Dominguez in a lengthy and balanced game.

Unlike in the previous round, Garry Kasparov found himself in a completely lost position in the endgame against Hikaru Nakamura. The American, who definitely had something to prove, failed to convert in the time scramble and had to settle for a draw.

Fabiano Caruana recovered from his first round accident and simply outplayed David Navara and won without any problems.

Sergey Karjakin won a pawn against Le Quang Liem and converted in a long game. Levon Aronian repeated the same sharp opening he tried against Ian Nepomniachtchi in the Sinquefield Cup but played a little too creatively and lost after, quite ironically, he failed to find a creative defense.

Leinier Dominguez had a difficult position against Viswanathan Anand but survived the storm and took home the half a point.

Garry Kasparov’s game against Leinier Dominguez was quite uneventful as the two exchanged most of the pieces and agreed to a draw.
The other draw of the round between Ian Nepomniachtchi and David Navara was quite strange. Navara chose a dubious opening and instead of trying to punish his opponent’s uncastled king, Nepomniachtchi allowed a threefold repetition.

Fabiano Caruana continued his powerful play by defeating Sergey Karjakin with an attack on the kingside. Viswanathan Anand could not recover his poor form as he fell for Levon Aronian’s tactical trick in a completely winning position.

The marathon game was between Le Quang Liem and Hikaru Nakamura where the Vietnamese player first missed a winning continuation and continued on into a bishop endgame. He went on to sacrifice the bishop in order to promote his passed pawns and was able to do so when Nakamura failed to find the only drawing continuation.