This is the next article in our series of analytical articles on past TCEC events. The main text can be read below on this webpage; to view the full layouted article in pdf format, including the important tables, graphs and images CLICK HERE.

TCEC is very grateful to the authors for the authors’ kind permission to publish these substantial and scholarly analyses of its events!

The second TCEC Cup (Haworth and Hernandez, 2019a) was won by ‘LC0’ LEELA CHESS ZERO beat-ing HOUDINI after the latter surprisingly took out STOCKFISH in their semi-final. The event, with its Rapid tempo of 30’+5″/move continued to be the favoured curtain-raiser before the current TCEC season’s Superfinal (Haworth and Hernandez, 2019b). TCEC Cup 3 began on April 29th 2019.

The ‘standard pairing’ was again used, with seed s playing seed 26-r-s+1 in round r if the wins all go to the higher seed. Thus, seed s1 plays s32, s16, …, s2 if all survive long enough. The higher seed is listed first in Table 1. This time, the matches – eight games plus any necessary game-pair tiebreaks – were played out only until the result was decided.

The usual ‘TCEC opening’ team, the second author here and Jeroen Noomen, randomly chose from three books with some regard for frequency over the board. Greater variety of play ensued from round 1’s 8-ply openings and 12-ply openings thereafter up to and including the semi-finals. The final took openings of various lengths from JN’s TCEC Superfinal books for seasons 9-14.

As in previous TCEC Cup events, interest focused on actual performance ‘%P’ compared with expected performance ‘E%P’ implied by TCEC ELO difference ‘ELO Δ’. The accuracy of the TCEC ELOs, the upgrades to over half the field and the character of the random openings were to be the main influences. 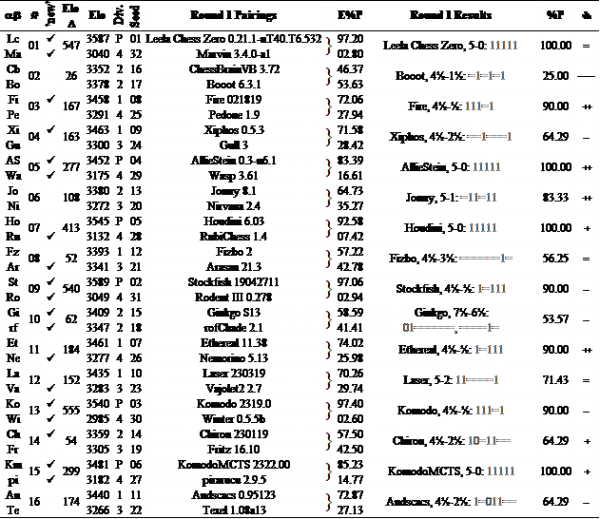 As expected, ‘LC0’ LEELA CHESS ZERO opened its campaign with a 5-0 clean sweep. ALLIESTEIN, HOUDINI and KOMODOMCTS repeated this feat. In the top half of the draw, the eventual winner did not concede a single game but this was to change. Marginal favourite GINKGO lost its first game, won its second and was taken to fourteen games before persevering against ROFCHADE. This was the only comeback and tiebreak of the first round.

The other match-winners to lose a game were CHIRON (to FRITZ) and ANDSCACS (to TEXEL) so ‘kudos’ to those engines. Best performers relative to expectations were ETHEREAL, ALLIESTEIN, FIRE and especially BOOOT which comprehensively eliminated CHESSBRAINVB, the seed above it. The draw between STOCKFISH and RODENT is also well worth a visit. The field was now exclusively TCEC15 Divisions P, 1 and 2 – the top 15 plus seed 17, BOOOT, almost as expected.

BOOOT put up a valiant fight against LC0 in some long and memorable games, particularly game 1 (Kingscrusher, 2019a) but still only scored a half-point. FIRE edged a match win in game seven against immediate rival XIPHOS. STOCKFISH beat GINKGO, g25, the final KRPPKRP just beyond adjudication echoing Carlsen-Caruana WCC 2018, Rapid game 1. LASER scored an early win against ETHEREAL but lost with its last Black of eight. Fifteen draws followed before ETHEREAL nosed ahead to win the longest TCEC Cup match to date. LASER’s fans are entitled to be disappointed, having come so close.

LEELA, by virtue of being top seed, gets the lowest seed left as long as results go with seeding. However, at this stage, no match is easy. LEELA duly overcame FIRE but it was only after a great fight, a credit to both sides. HOUDINI, like BOOOT in Round 1, overturned the seed immediately above it, in this case ALLIESTEIN.

In the lower half of the draw, ETHEREAL surprised the growing audience and STOCKFISH with a straight eight draws but then STOCKFISH reeled off two wins – the second of which it could arguably have lost after 28. … Rbd8. Enter the dragons, KOMODO and KOMODOMCTS, over-hungry after the delay and more than ready for a fight, see Fig. 2. After much effort, the upstart newcomer overturned the seeding even more than HOUDINI, its win in the last of the eight scheduled games allowing no response. 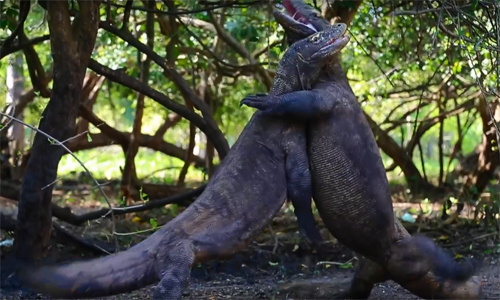 In the semi-final, the favourites were not challenged and came through, both being unbeaten so far. This left HOUDINI to face KOMODOMCTS in the play-off for third. This was won comfortably by HOUDINI which continues to impress at this level despite not being updated.

In the final, LEELA’s game 3 win was not decisive as STOCKFISH won convincingly in the last scheduled game. The tie-break then ensued and LEELA ironically took advantage of two rare but not unknown 7-man STOCKFISH errors (Aloril, 2019), here in positions 155b and 167w. LEELA progressed to the win without its usual hesitancy as it now had the use of the 6-man EGTs. Fig. 3 shows the defence, the value and depth-shedding errors and the progress to the win. In the return game, LEELA eroded STOCKFISH’s initial advantage and then attacked in a drawn position: only perpetual checks across 100 moves prevented STOCKFISH from being mated.

The early rounds went very much as predicted by the form book though several losers put up stronger resistance than expected. At the top level, few mistakes were made by the closely-matched engines so in the short matches anything could have happened. Nevertheless, LEELA confirmed that its win in TCEC Cup 2 was no fluke and it retained the title. Neural networks do finally seem to be coming through with genuine advances, at Deep Mind (Hassabis, 2019) and elsewhere, but troublingly it is not obvious why they work and when they go wrong. The engines created in the Shannon (1950) genre are at least valuable as benchmarks and have their reputations to defend. Congratulations to LEELA (Chessdom, 2019; Linscott, 2018) and to all participants for some top quality chess. We will see its equal but will we be equal to appreciating it? Helpfully, Kingscrusher (2019a/b) continues to reveal the context, themes and dynamics of the games with his rich commentaries. The e-version of this report (Haworth and Hernandez, 2019c) provides statistics beyond Table 6 and all games with some analysis including play-outs of all decisive games, some of which end more obviously than others. Semi-final LEELA–HOUDINI game 1, for example, is relatively complex in the field of TCEC-adjudicated wins.