The Reykjavik Open 2013 started today in Iceland. The event gathered a large field with very strong players, including four rated above 2700.

There will be minute by minute updates in the Chess bits section during this tournament.

As it usually happens in the big opens, the first round sees some very unbalanced match-ups. For instance, the top seed Anish Giri faced an Icelandic player whose elo is 650 points lower.

This fact makes the first round results quite predictable. However, sometimes a surprise might happen because the higher rated player is over-confident or the lower rated player is having the game of his life.

The first result came when Czech GM David Navara defeated Marcel Martensini from Switzerland in just 20 moves, after the Swiss made a mistake in the opening. 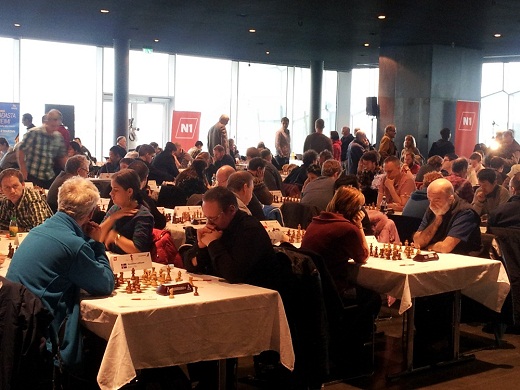 The playing hall during the first round

While some players like Ivan Sokolov, Bartosz Socko and Ivan Cheparinov were already resting before tomorrow’s round, the Chinese star Ding Liren kept fighting to get his first point. Finally, he had to settle for a draw.

Sebastian Mihajlov, a Norwegian player with a 2059 rating took the battle to an endgame with a strange material balance. Ding Liren had a rook, a bishop and two extra pawns for Mihajlov’s queen. The Norwegian managed to set up a perpetual check on move 64.

Another surprising result came in a lower board. Soren Jensen from Denmark defeated the Norwegian IM Frode Urkedal using the Muzio variation in the King’s Gambit.