The 2016 FIDE World Chess Championship, the pinnacle of the global sport played by more than 600 million people, is to take place in New York, FIDE announced.

The month-long contest will take place in November between Norwegian Magnus Carlsen – the reigning champion and the highest ranked player in history – and the winner of the forthcoming Candidates Tournament, which will take place in Moscow in the next few weeks. 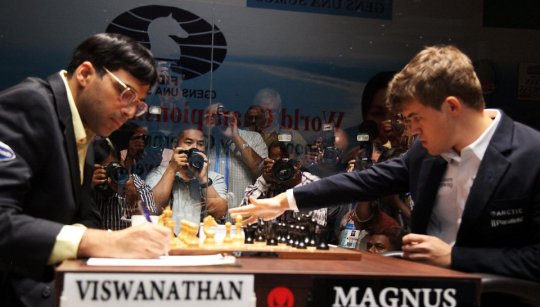 Two American grandmasters, Hikaru Nakamura and Fabiano Caruana, are competing in the eight-strong Candidates Tournament to win the right to challenge Carlsen in New York. The other six Grandmasters in this year’s Candidates tournament are Peter Svidler and Sergey Karjakin of Russia, Vishy Anand from India, Veselin Topalov from Bulgaria, Anish Giri from the Netherlands and Levon Aronian from Armenia.

Prior to that Bobby Fischer was World Champion between 1972 and 1975 after defeating Boris Spassky in a contest that symbolised the Cold War tensions between the US and the Soviet Union.

Chess is becoming increasingly popular around the world and is the only game that is pre-downloaded on nearly every new smartphone. Hundreds of millions of games are played over the internet every week and in the US more people play chess regularly than golf, according to YouGov, the respected polling organisation.

The last World Championship match, held in Russia in 2014, enjoyed record-breaking coverage with the total audience for the whole event topping 1.2bn people. Carlsen, won that contest by defending his title for the first time against ex-world champion Vishy Anand.

According to the organizers, the broadcast of the Championship will feature a studio that made chess broadcasts immensely popular in Norway, where chess is breaking TV audience records. The organizers also plan to make this championship a truly New York experience, creating a venue that will feature retail experience as well as red carpet events.