Despite the loss in the first round, Levon Aronian didn’t hesitate to repeat the Ruy Lopez Anti-Marshall. Veselin Topalov chose the line that was earlier seen in Grischuk’s games.

Black conceded the bishop’s pair to get a pawn on d4 and the position appeared to be equal. White decided to complicate the matters with the queen’s excursion to h5.

Aronian thought for a long time but eventually decided not to take the pawn on e4. Soon-after he played 22…Ba6 allowing wild complications after 23.Bd6.

White captured the h7-pawn and set his f-pawn in motion. But black was just on time to create counterplay by pushing his d-pawn. White was eventually forced to take the perpetual check. 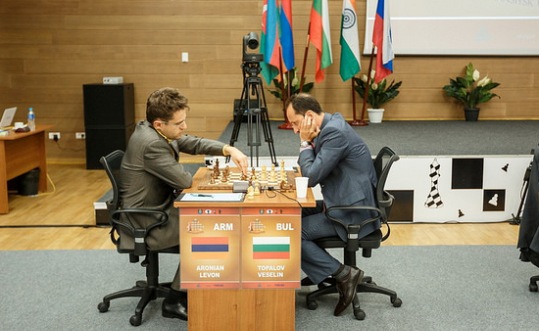