This was the second Masterclass of the tournament and it proved quite lively as elite – GM Vassily Ivanchuk gave an inspiring display of games and analysis.

Vassily showed five games he played in a match in Riga, 1991, versus Leonid Yudasin, and then took questions from the audience.

The Masterclass presented by tournament director Stuart Conquest lasted 1hr 40 minutes, and was shown on our website www.gibraltarchesscongress.com where the entire show can be viewed again. It was recorded live in the unique, built-for-purpose webcasting suite at the Caleta Hotel.

GM Ivanchuk a former Champion of the Gibraltar Maters has a FIDE rating of 2739. ‘Chucky’ is a regular visitor to the Gibraltar Festival and enjoys returning every year.

More master classes will be held on Monday 3 Feb and Tuesday 4 Feb. They will also be broadcast LIVE on the internet and simultaneously in the Catalan Lounge at the Caleta Hotel. 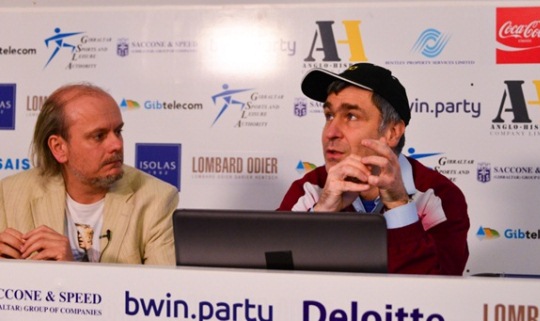