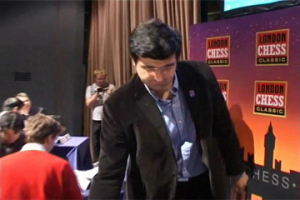 Many congratulations to Vladimir Kramnik of Russia, who has won the third London Chess Classic. If you needed someone to save your life by getting a draw with White, Kramnik would be most people’s first choice. He was solidity personified against Levon Aronian, rapidly liquidating to a level bishop ending. That gave him the point he needed to take the trophy.

Magnus Carlsen could still have shared the money (though not the trophy) with Vlad had he won with Black against Nigel Short in their now traditional last round encounter, but he had rather worst of things. The game started with the Giuoco Pianissimo – ‘very quiet game’ – which most of us learn when we are beginners. “I haven’t played this since I was about eight,” said Nigel. “I haven’t scored with White in this event and I decided to play something incredibly boring. Magnus tried to inject some excitement into [the game] – but the excitement was all for White.” Nigel managed a picturesque d4-d5 thrust, which was a very useful pawn sacrifice, and the resultant activity saw him go from a pawn down to a pawn up. He was close to winning at one stage and Magnus admitted he “played a horrible series of moves” to get himself into difficulties.

However, it turned out to be what chess writers like to call a ‘symbolic advantage’ only. Nigel was a pawn up, but with all the pawns on one side of the board, and the world number one defending stoutly, his winning chances abated. He indulged in the ritual torture that all GMs practise against each other in such positions (it is part of the unwritten grandmaster’s code – your opponent tortures you when he or she gets the chance, so you are honour bound to do the same back to them). But it was unlikely to bear fruit against the world’s top rated player and a draw was the result.

The game of the day was Hikaru Nakamura versus Mickey Adams and was earmarked as such from the moment that Hikaru played the King’s Gambit. As with the previous outing in the tournament for this museum piece of an opening (when Nigel Short played it against Luke McShane), initial exuberance soon gave way to caution and tentativeness as Hikaru tucked his king away on h1 and allowed a c4 counter-thrust. A pleasantly piratical game ensued, with White launching a pawn assault on the queenside as Mickey Adams pointed his bishops at the white kingside.

Watching in the VIP room was a fascinating experience as the super-GMs who had finished their games were joined by Garry Kasparov and other former greats of the game. GMs Julian Hodgson and Stuart Conquest were the commentators there but for once they were heavily outgunned by the audience. Black seemed to hold sway for much of the game but eventually the great pendulum swung in White’s direction. Garry Kasparov it was who first spotted the change in wind direction: “38 Rfe1 and now it looks better for White.” A blunder followed and White duly triumphed, taking Hikaru Nakamura to clear second in the table and condemning poor Mickey Adams to last place. Credit to both players, though, for providing the last round audience with a feast of chess entertainment.

Replay all games with analysis here

A surprise, although Hikaru has been known to play it in rapidplay and minor US domestic events. “I felt inspired by Nigel… and felt like taking a chance.” (Nakamura) At which point GM Chris Ward interjected: “Can we just clarify: you’re not so happy with one or two of the openings your other coaches having been giving you and you’re following Nigel’s openings from now on?” The rather arch emphasis which Chris placed on the words “other coaches” and “Nigel” indicated a wicked, joking reference to Hikaru being trained by Garry Kasparov. A knowledgeable audience spotted the reference and laughed, as did Hikaru, ruefully. “I followed Magnus yesterday and Nigel today!”

The speciality of GM Joe Gallagher (a true Brit, though now qualified for Switzerland).

11…cxb3 12 axb3 is not so good as White can soon play c4 and undermine the f4 pawn’s main defender. Hanging onto the f4 pawn is a key factor in Black’s plan at this stage.

Hikaru felt Black was a fair bit better here but that Mickey had been unable to maintain the pressure.

Hikaru didn’t like this though the computer disagrees. If 20…Rb7, the b-pawn is restrained but then 21 Rfe1 applies a little pressure to the e-file.

Hikaru overlooked that the rook can double back in this way.

Black now has an extra pawn but his structure is far from ideal and it is not so easy to exploit.

This move takes courage. White is worried that Black will organise a support for Black to play Bd5 “and it will be pretty much game over”. But the advance of the b-pawn looks equally scary.

It is easy to say with hindsight but the more obvious 29…b3 looks more promising, when White has to stay active with 30 c6 Ra7 31 Bc3 b2 32 Nd2. The computer comes up the lively 32…Bxc6!? 33 Qxc6 Rc8 34 Qxf6+ Bg7 35 Qxg5 Rxc3 but that would take some calculating for a human. However, the problem with the text move is that it leaves Black’s kingside pawn structure very shaky.

Hikaru characterised this as a ‘blunder’ but that may be overstating it.

This is what Hikaru had not seen and caused him to berate himself. “I should just be losing here now.”

Black starts to go wrong. Both players thought 36…Qb6 would just win for Black here, e.g. 37 Bxc5 Rxc5 38 Qd4 and now 38…R5xc6! is the key move that Mickey failed to find, when he would have a fairly simple win.

Suddenly White’s position has become more solid and he can think about offensive action. He is probably better now.

Suddenly Black has a problem defending the f6 pawn.

So that’s the third London Chess Classic over and done with. The end of a chess tournament is always a melancholic affair, as the organizers pack up the equipment and take down score tables, the winners lug home their trophies, the unsuccessful slink away to lick their wounds, and old chess friends part company for the dreary-seeming ‘real world’.

Just as I myself was getting ready to leave for home, I saw something I had never seen before on such occasions: a young man sitting playing a guitar on a bench just outside the commentary room. And playing quite beautifully, too. I love playing the guitar but I cannot play like this talented young man. I stood and listened to him giving this impromptu concert, all on his own outside the now deserted commentary room. Presently, Nigel Short happened to be passing and he too, as a guitar aficionado, stopped and marveled at the music coming from the young man’s unusual eight-stringed instrument. “Fantastic!” exclaimed the grandmaster.

The young man was Alf Wilhelm Lundberg, from Norway, and you too can listen to some of his music at his website, www.alfwilhelmlundberg.no – I asked him what he was doing there. He told me he happened to be in England and had stopped by to see his famous compatriot Magnus Carlsen but he had missed him – the world number one had already departed. He’s a chess player too, incidentally. Norway – great chess players and great guitarists. Sounds like my sort of country.

On that note, I must close. Dear reader, I hope I have been able to bring to life some of the thrills, incidents and excitement of a wonderful tournament with you. It has been a great privilege to write for you. I wish you all the compliments of the season – may Caïssa go with you in 2012 and may your errors not be of the double question mark variety.