World champion Magnus Carlsen will once again be one of the participants when the Tata Steel Chess Tournament starts in January 2021. It is the first over the board tournament in which Carlsen will participate since reaching the age of 30. And it is only the second international classical chess tournament to be held since the outbreak of COVID-19.

The Norwegian world champion is perfectly at ease in Wijk aan Zee. He will participate for the 17th time in January. Apart from Carlsen four other top 10 players will participate: Fabiano Caruana (this year’s winner and number two of the world), Ian Nepomniachtchi (4), Maxime Vachier-Lagrave (5) and Shakhryar Mamedyarov (8).

Whether or not (a limited number of) spectators will be allowed to visit De Moriaan will depend on the COVID-19 measures in place at the time. All games can be followed live online. 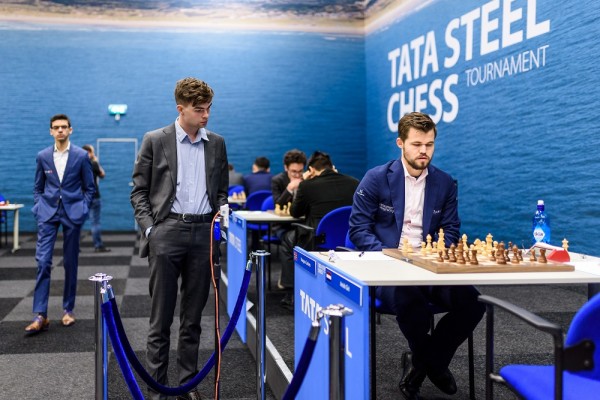 Tournament director Jeroen van den Berg: “the flood of congratulations and positive reactions I have received from people all over the world after the announcement is proof of how special it is that the Tata Steel Chess Tournament will really be played in Wijk aan Zee in these times. People show tremendous respect for the fact that Tata Steel, the municipality of Beverwijk and the other authorities have gone to such great lengths to make sure that the world’s most prominent chess tournament can go ahead. Chess aficionados have had to do without big international classical chess tournaments for almost a year. The Tata Steel Chess Tournament 2021 is seen as a beacon of hope. People all over the world are craving for it.”

Jeroen van den Berg: “The 83rd edition of the Tata Steel Chess Tournament will definitely see exciting games. One reason is that most of the grandmasters have hardly played classical chess since the outbreak of COVID-19. Participating in the world’s most challenging classical chess tournament (with 13 rounds) will thus prove to be very challenging and could lead to surprising outcomes. And favourites like Carlsen, Caruana, Nepomniachtchi, Vachier-Lagrave, Mamedyarov and Giri will be facing the youngest generation of grandmasters, who will try to steal the limelight by beating them. That is what is so unique about our tournament: the mix of established players and up and coming talented players like Alireza Firouzja (Iran) and Jan-Krzysztof Duda (Poland).”