The FIDE World Cup 2011 was officially opened in Khanty Mansiysk. The beautiful ceremony began according to schedule at 20:00 local time (16:00 CET). After a short introduction from the hosts of the competition, the FIDE President Kirsan Ilymzhinov and the Khanty Mansiysk representative Mr. Filipenko were invited to the scene to greet the participants and the chess fans. 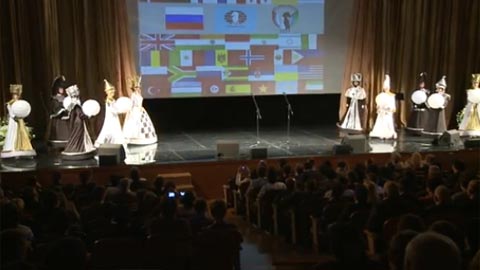 The curtain is opening for the long expected World Cup 2011

Mr. Filipenko noted, “Ugra has already conducted four successful World Cups and one Chess Olympiad, which shows that the region takes the organization of events very seriously. This allowed us to create a large chess movement in Ugra and make this sport a mass one.”

Ilyumzhinov noted, “In just a few year Khanty Mansiysk has not only become one of the chess centers of the world, it has become a chess Mecca”. Ilyumzhinov praised the efforts of the local organizers and their work in the chess in schools program and wished the participants good luck in the games. 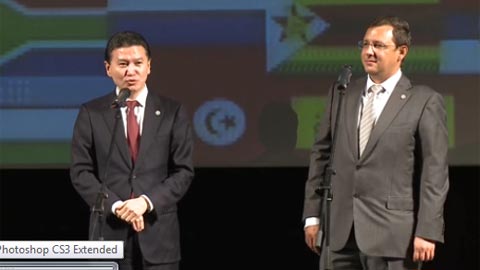 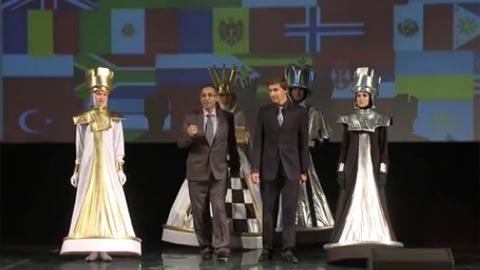 The ceremony continued with the drawing of colors, conducted by the chief arbiter Ashot Vardapetian. The chief arbiter invited the rating favorite of the tournament GM Sergey Karjakin (Russia). The first and all odd numbers will start with black. 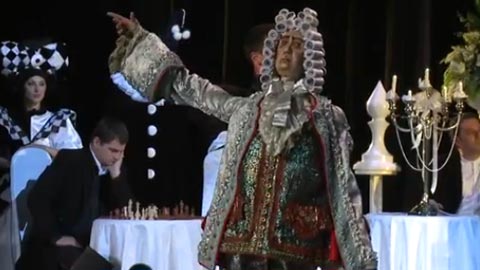 Café de la Régence performances, with the marble chess table in the background

The rich program of the opening ceremony started with the traditional honoring of “Café de la Régence”. This was already done at the 39th Chess Olympiad . All famous chess masters of the time played in “Café de la Régence”. Among regular visitors of the Cafe were Denis Diderot, Jean-Jacques Rousseau, Francois-Andre Philidor Danican, Napoleon and Benjamin Franklin. Denis Diderot described the cafe in his book “Le neveu de Rameau”. For many years, the Cafe took pride of the marble chess table, behind which Napoleon played in 1798.

Using a similar theme during the World Cup opening ceremony, the stage contained the marble chess tables and around them followed series of musical and dance performances.