The Minister of youth and sports Azad Ragimov, the President of FIDE Kirsan Ilyumzhinov and his deputy Georgios Makropoulos, the president of the Chess Federation of Azerbaijan Elman Rustamov, vice-presidents of FShA Makhir Mamedov and Faik Gasanov took part in the ceremony.

The meeting was opened by Faik Gasanov who reminded about the FIDE Congress decision to award the organization of the World Cup 2015 and the Chess Olympiad 2016 to Baku. 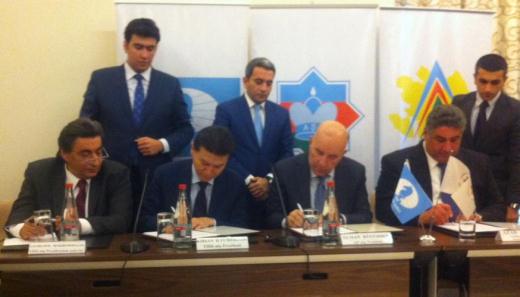 Minister Azad Ragimov stated: “The Chess Olympiad is a very important event for Azerbaijan. I think that everybody in our country is happy about this. More than 160 countries participated at the Chess Olympiad 2012 in Istanbul. I believe that there will be more participating countries in Azerbaijan this time, and it is another chance for us to show our guests that we are capable of holding large competitions”.

Elman Rustamov noted: “Carrying out large chess competitions in Azerbaijan shows once again that Chess plays a very important role in our country. It will be one of the best Chess Olympiads in the history of game”.

FIDE President Kirsan Ilyumzhinov said: “This is a momentous event not only for Azerbaijan, but also for the entire chess world, for FIDE”.