The 19-years old Nikos Galopoulos and the 20-years old Epaminondas Kourousis are leading with 4 points after 4 games at the International Open Aegean Championship “Ikaros” 2012.

The youngest ones (6 years old!) are Sofia Georgitsi and Tuure Maki-Uuro, while there are 8 more children up to 10 years of age! 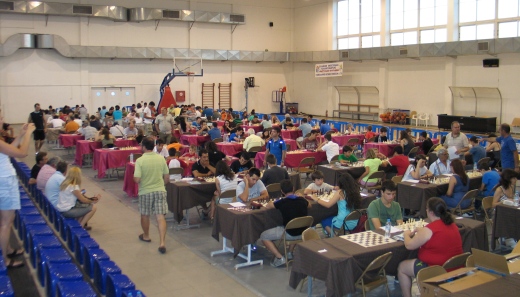 The people behind the tournament

Every successful tournament, like this year’s one, is based upon a team of people who work creatively and constructively in the background. These people are the tournament directors Michalis Venios and Dimitris Skyrianoglou, the arbiters Ulysses Vazelakis, Antra Cimina, Evgenia Zevgiti, Kostas Halioris, Periklis Geropappas and Michalis Keramiotis, and the secretariat duo Dimitris Kapagiannidis and Antzela Shiaka.

Especially valuable for the tournament was the support of Dimitris Sotiropoulos (http://www.moebius.gr), who, apart from his innovative proposals, designed the poster, the shirts of “Ikaros” 2012 and the logo of Ikaria Chess Club.

The main sponsor of “Ikaros” 2012 is ANEK Lines (http://www.anek.gr), while major supporters are the Greek Chess Federation (http://www.chessfed.gr), the Cultural Club “Ioannis Melas”, the chess department of Panellinios G.S. (its curator, Petros Kolyvas remains one of the most earnest supporters of all Ikarian chess activities), together with many other members of the Greek chess community.

The greatest support, however, came once again from the Municipality of Ikaria (http://www.dimosikarias.gr). The mayor Christos Stavrinadis, the vice-mayors Alexandros Skaros and Giorgos Kritikos, the head of cultural and sports events Stratos Lakios together with Maria Kypreou all showed personal interest for the tournament and helped for its success.

More info about the 35th International Chess Tournament “Ikaros” 2012 can be found at: http://www.ikaroschess.gr