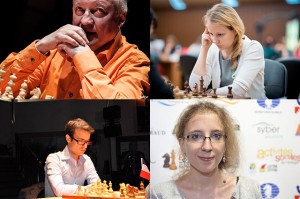 The 3rd Anatoly Karpov Trophy is running from 23rd October to 25th October 2014 in Cap d’Agde, a Mediterranean resort of the town of Adge in France.

The event is a mixed match of Franco-Russian friendship, in honor of the 12th World Chess Champion Anatoly Karpov.